Actually it started on Tuesday, when Suzanne and I went up to Tonapah to pick up a couple of jennies that needed to be rehomed.  The woman had told me they were mother and daughter and needed their feet trimmed.

So off we went on an adventure.  Got there and was told the daughter was a hinny, which is a cross between a horse stallion and a donkey jenny rather than the normal mule, which is a donkey jack and a horse mare.  We had also been told they were not trained to lead, halter, etc.  Hmmmm........!!  I had called Michele from Lucky A Ranch, she and her daughters have done a lot of training and I thought they might be interested in work with these girls.  Now I'm going to have to tell her one of them isn't a donkey after all........!!!  LOL

When we saw them, there was no question, they were both donkeys.  Whew...! 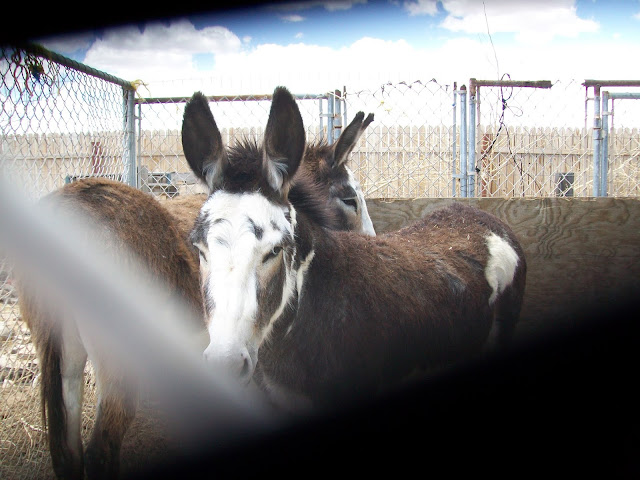 We could tell that they had not been handled much.  The daughter is 4 years old and had never had a halter on.  The mother wasn't interested in having one on again, but she actually loaded in the trailer by herself.  The daughter had never been handled much if any and was pretty scared, so it took quite awhile to get her loaded, but we finally got to head home.  They stayed in a pen here at the rescue overnight and we delivered them to Michele yesterday. 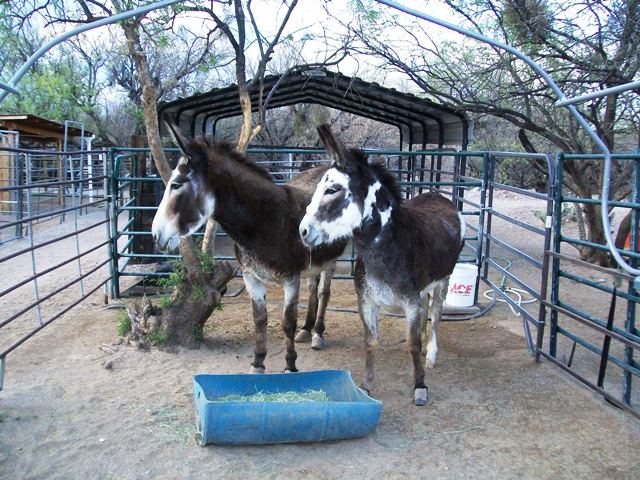 They are pretty girls and I think they will be easy to work with, once they figure out no one is going to hurt them.  They haven't been abused or anything like that, they just haven't been taught anything.  The woman said she got the mom away from guys roping her over 4 years ago, and the daughter was born a few weeks after the woman got her.

I had never been to Michele's rescue, although I did know she had some French Poitou donkeys.  So Suzanne and I loaded up and headed for her place. 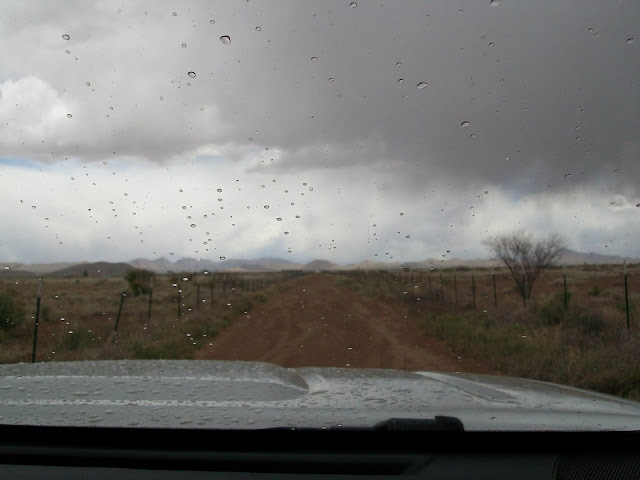 The weather wasn't exactly Arizona desert type weather.  Suzanne has all the fancy do dads in her truck, one being GPS to help you get where you are going.  May I say, we spent a lot of time backing up this dirt road that had a lot of deep ruts in it.  We got about 1 1/2 miles down this road before we figured out, it had no outlet.  The fence on both sides was too close to turn around with a stock trailer bouncing behind, so she got to back ALL the way back, until there was a side road to back into and get to head the other direction.  I was impressed, she did great, even with the ruts.

Finally got to Michele's and wow........she has a donkey lover's paradise, and mules too, if you are so inclined.  She has about 50 total equine and has more Poitous than I've ever seen in one place. 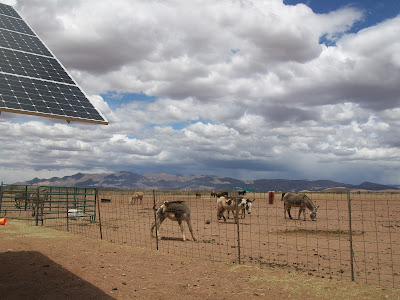 She has quite a few large pens, so everyone has plenty of space. 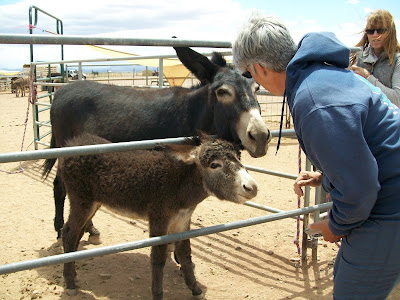 Michelle has 2 babies 1 and 2 months old. 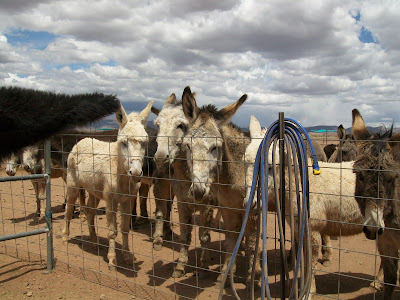 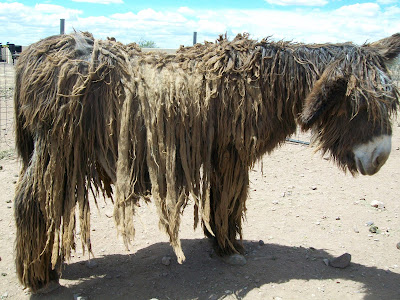 This is a purebred Poitou 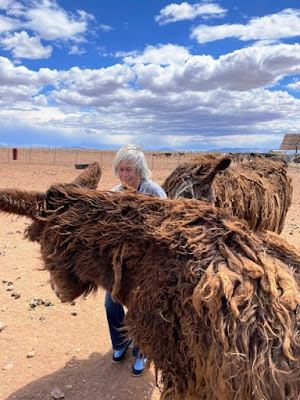 That's me with a couple of purebred Poitous 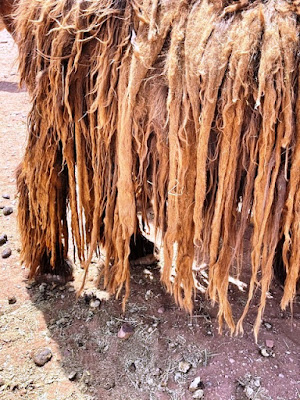 Their dreadlocks are really interesting.  Underneath the dreadlocks is what looks like another coat of very soft fine hair about 3 or 4 inches long.  I had wondered if the dreadlocks went to the skin and might cause sores, but they don't. 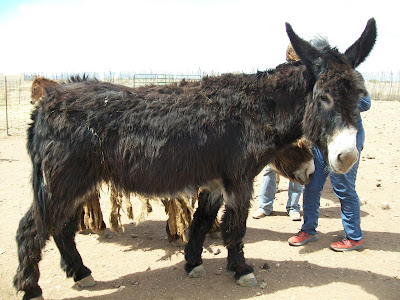 This is a 50% Poitou, he looks just like our BlackJack.  In fact I think BJ is a little bit fuzzier, especially on his face we can't hardly see his eyes.  Big Gus also has the look.

Michele said her girls were thrilled when they got home from school to see the new donkeys.  They'll have to wait to do much training until their feet get trimmed, but in the meantime they can groom and play with them.

Coming home we sat on the highway for almost an hour in a stall.  Never got close enough to whatever the problem was to see what it was.  There is only one highway running east and west in this area.  If they have a wreck it's not unusual to close the highway down in one direction for hours, especially if there is a fatality.  Really messes up your appointments in Tucson if that happens.  We always take a phone number, so we can call, just in case.

Everyone here are doing good.  Ruthie was running a temperature for a few days and not interested in eating, but she seems to be over whatever she had and back to normal.

Since Suzanne had to drive in rain yesterday, we were hoping that we would get rain out here..........no such luck, just lots of spring wind.  We haven't had a good rain in over 2 years and the plants are starting to look pretty dry.  The "experts", that's anyone you talk to say we're going to have a hot summer with a normal monsoon.  We are so dry a normal monsoon wouldn't bring us up to our annual rainfall, let alone make up for our 2 year deficit.

What an adventurous day! You got to see the Poitou!! Great pix!!

The poitou cannot be known for there beauty. I much prefer short hair. Thay looks sohot hanging down and all dusty looking. I knoe everyone has different taste. Glad you had a safe trip.

It was a fun day very interesting. I know what you mean Ellie about the Poitous. I was really surprised that the dreadlocks are not even close to their skin, they are all over the exterior....!! LOL I asked Michele how they would take the heat. She was up in the White Mountains at Alpine. Now she is in a grassland valley on the desert floor. She said they should be fine, that the dreadlocks actually insulate them. The dreadlocks are heavy, but I guess they are use to the weight.