Lately we have been doing tours almost every day.  I think the Benson Visitors Center might have something to do with it.  They've always been real good about telling people  that we're here if they are looking for something to do in Benson.

Last month they came out and did a video to put on their web-site.  Ever since then, we've been keeping pretty busy.  If you have a computer this link will take you to the video.   https://www.youtube.com/watch?v=ozI6-RalZ5w

Lynn stopped off on the way back to Colorado to run a 250 mile race from just north of Phoenix to Flagstaff.  He started Monday morning a little before 6am, it is now Thursday afternoon and he's still running, he has about 80 miles to go to finish.  About half of the runners have fallen out, my question is...........only half...........LOL  Linda and some of their running friends are running with him to pace him and help keep his mind on finishing.  Before it's over some of them will have ran quite a few miles too. 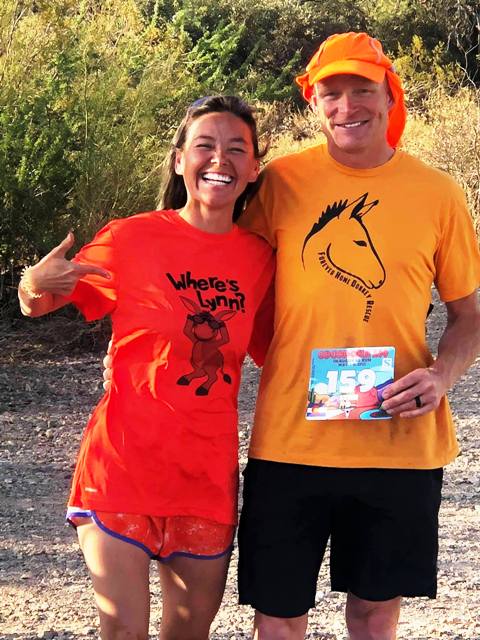 Linda and Lynn before the race started. 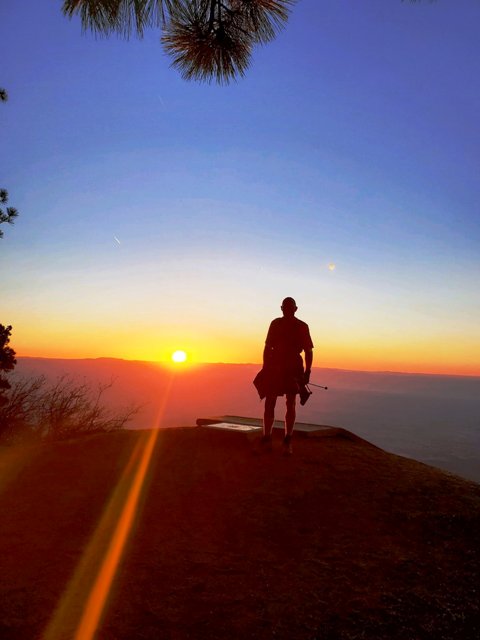 Ruthie got over whatever she had and is back to eating and no temperature.  She got moved to the west side pens, in between Koshare and Tula.  She was kinda by herself over on the east side.  Since she's been moved she's been hanging with the "A" team, who's leader is Tula.  Yesterday she and Tula were grooming each other, so I guess she's found her "people".

Monday we are going to pick up Justice.  He is a lonesome 20 year old gelding in a snake & critter rescue.  The wife died and the husband is overwhelmed and trying to downsize.  Since Justice is by himself, he really needs to be rehomed.  I'll share pictures when I get them, next week.

Two of our guys hitched a ride from when they went out to California for the race last month.  They ended up going to Colorado with some of the Colorado people that came down for the race. 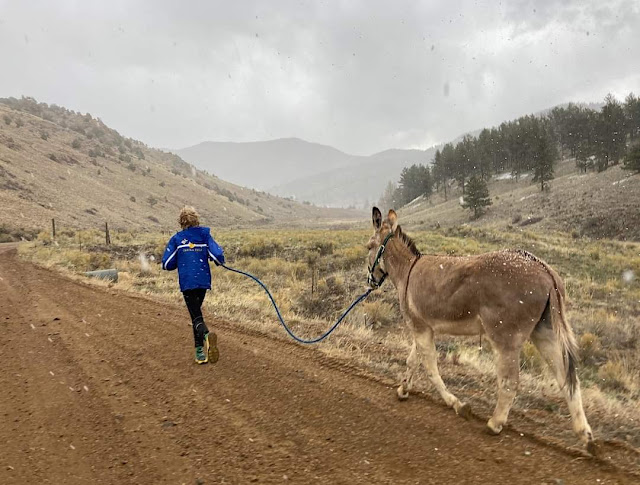 This is Oliver showing his new people that he is a team player when it comes to running.  He's really been a surprise, New Year's Day he won the 1st race he ever ran with a team member that had never ran with a donkey, although he had ran people races. 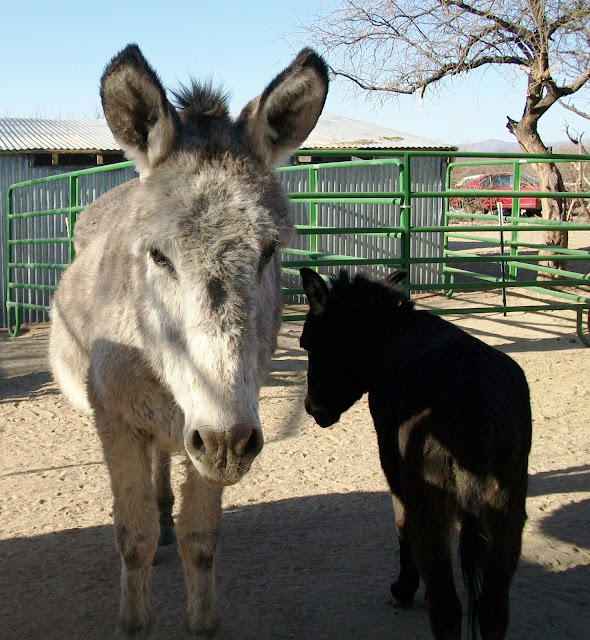 Benji is also going into a racing family, they also pack and camp, so he'll have a job.  When we picked him and Jenny NKA (now known as) Nell, they were in a pen with Alpacas as neighbors on one side and horses on the other.  They didn't have a job, they were just there.  It's really good that they will both have jobs with people that appreciate them.

I took this picture before Benji left.  He and Arrow became good friends, size doesn't seem to make a difference when they are choosing who to hang with.  Arrow also went to Colorado, with Lynn and Linda, so they might see each other at some of the races this summer. 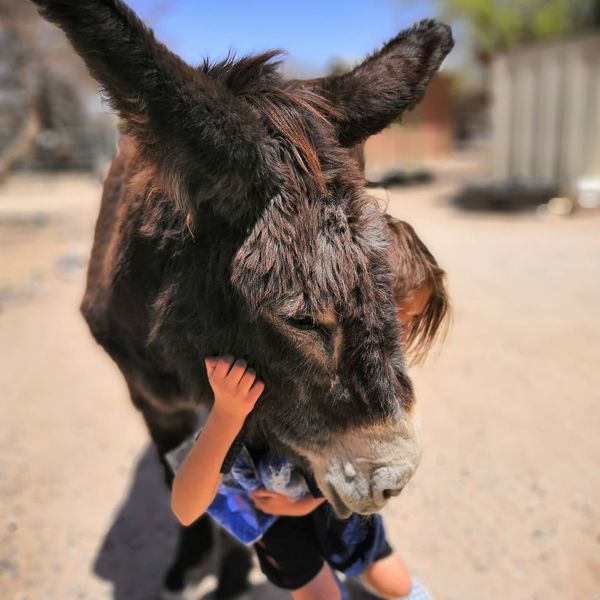 Here is Big Gus soaking up all the attention he can get.  This young man and his Mom come out a groom quite often and his Mom happened to catch Gus enjoying being the center of attention. 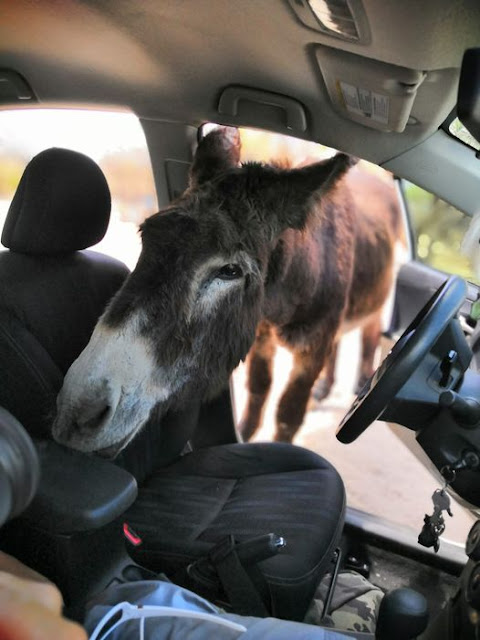 Of course when they got ready to leave, Gus tried to get in their car.  One of these day he's going to figure it out.  He's already figured out if people leave a window open, he can stick his head in.  It takes two of us to remove it, he can make that head really heavy..........!!! LOL

Susanne will be taking donkeys up to Flagstaff for the  Juniper Jog should be a lot of fun, Sunday the 23rd of May.   John and I will stay home and take care of donkeys.  Actually I will be racing Saturday night May 22rd, so John and I will revert to the way we use to race, when it was just the 2 of us.  We feed early, which of course the donkeys don't remember being fed when it gets to be 5pm.  Then they have to stay in their pens until we get home, which is almost as bad as not being fed at 5pm.

But Jorja a neighbor that helps with the donkeys said she'd come over and let them out, so it won't be as bad as it could be......!! LOL  Of course they will expect Sunday morning breakfast to be served on time, especially since they will be fed early Saturday afternoon.  So we have to stagger out of bed on a few hours sleep to take care of their needs.......!! LOL

When we were younger and foolish we use to race at a track that was 130 miles one way from our gate to theirs.  We would usually get home about 4am and sure enough at 7am the donkeys started letting us know they hadn't seen any movement in the house and we needed to get out there and take care of them....!!  LOL

Here is a video Linda took of Harley and Jackson wrestling, don't think either of them won, but they did seem to be having fun.