It's a little early in the process, but it sounds like good opportunities for them to find their forever homes.

Justice still needs to get his feet done.  We've noticed he has a "wonky" right rear foot. He doesn't limp or anything like that, but when he stands he usually isn't standing on it and this morning I noticed he was resting it on his other rear foot.  While it was up like that I sneaked a peek, he has way too much frog and the bars really need trimming, they look overgrown.  I would imagine it's been damaged at sometime in his life, although it doesn't seem to bother him at all.

Ruthie was out in a foster home for about 6 years and came home a few weeks ago because the jenny she was with died.  She is really sweet and has fit in well with the "A" team.  That consists of Tula the head jenny, Frijolita her 2nd in command, the boys, Boaz and usually Casper the little mini mule, sometimes BlackJack make up the "A" team.  Ruthie has blended right in.  But she is healthy and it would be nice for her to have a family of her own.

Things have really been lively around here.  Last week-end Suzanne and 7 of our donkeys participated in the Juniper Jog a 5+ mile jog at Flagstaff, AZ put on by the Bray Club.  Everyone had a good time, our Harley and his team mate Gary finished 3rd overall.......!! 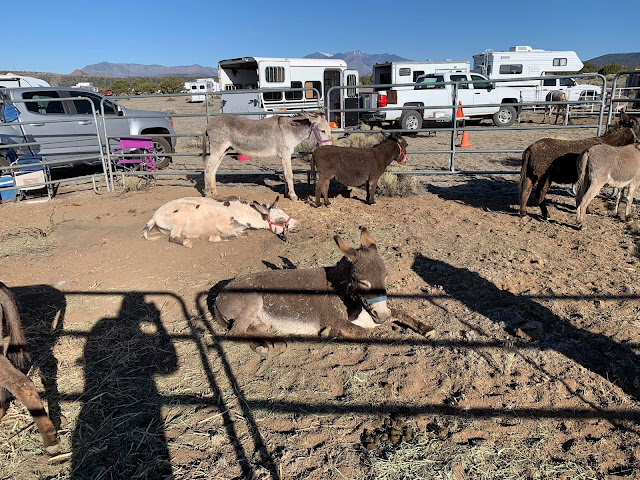 Our guys in their pen, with a few others.  The donkeys enjoy having friends to hang out with and there's plenty of room. The spotted one "resting" is Harley that finished 3rd, don't know if this picture was taken before or after the JOG. 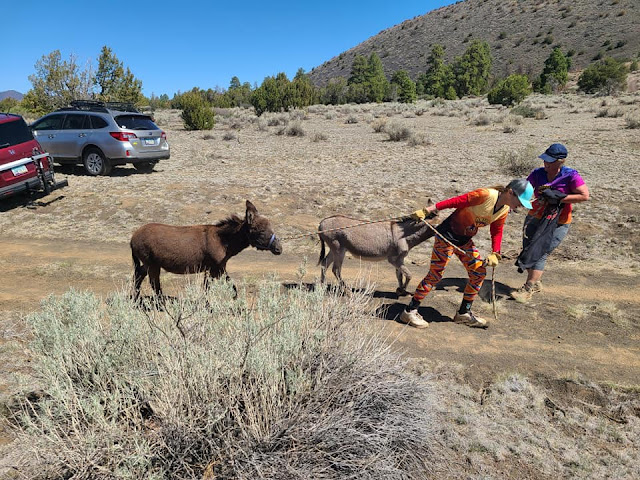 LaRoy and Jackson are making their team mates do all the work. 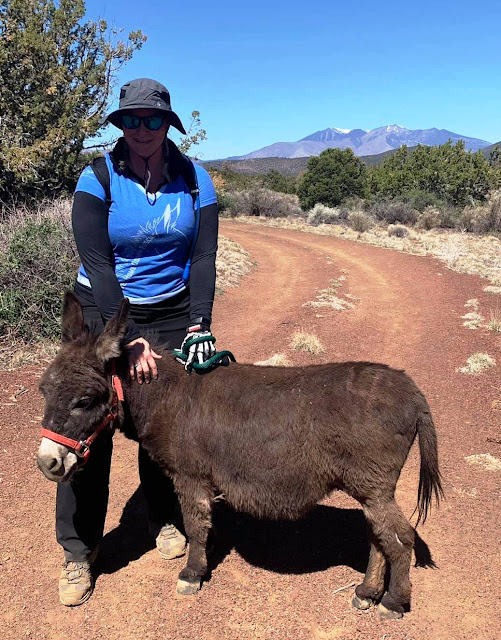 Siggy and his team mate Renee stopping long enough for a quick picture.  Siggy is a micro mini, he is only 28 inches tall.  He really doesn't know he's little and has no problem challenging any of the guys that might think some of the girls are pretty cute. 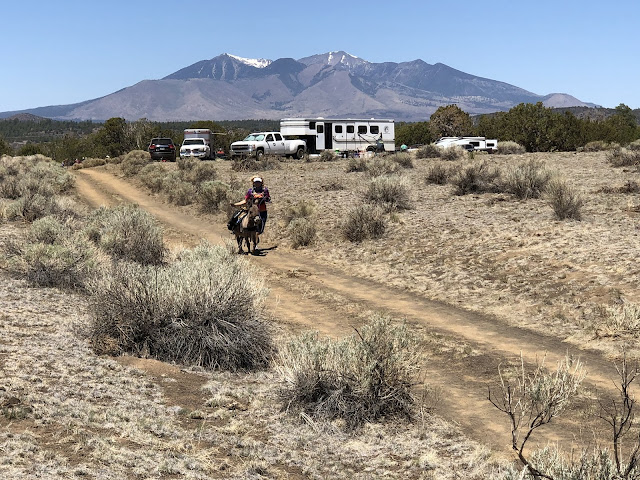 Yes, that is snow on the mountain in the background.  The forecast before they left said it would be 30-33 degrees Saturday night, where the race was........it got down to  27* with a wind chill that made it feel 21*.  A lot of them were "roughing it", sleeping in their cars in sleeping bags and reported it was a might bit chilly.  One good thing about Arizona, is as soon as the sun starts rising in the morning, so does the temperature.

I raced Saturday night for the 1st time in a month.  This year, so far has been a challenge.  We've only had 3 cars show up for the 1st 3 races.  The mini stocks are having the same problem, so the track has been putting the 2 classes together.  Our cars are stock, the mini stocks can do a lot of work on their cars we aren't allowed to do.  So they pretty much run away from us, but our finishes are kept separate.  So we might finish 5th, but actually get scored in 2nd place for our class.

We are pretty much resigned to the reality that they will probably not run our class next year.  It's not much fun to watch or participate in, so I can't blame them.  Unfortunately there isn't any tracks that run the Hornets close enough that we could drag the car to, and continue racing, so I might have to retire.......!!

To add to the on going challenge, the track decided they would make our race more interesting by having half the race on asphalt and half on the dirt infield.  There's a few reasons that isn't a good idea, one being going from one type of racing surface to the other, especially muddy dirt to asphalt can be messy.  Another is, they don't have lights in the infield directed to the infield.  They are all pointed outwards to the asphalt.

But I've always said if someone furnishes you a track to race on, you best be there to help make the program.  I've only missed one race in 7 years and that was the last race in 2017, after I busted my knee in the next to last race of the season.

We had planned on taking the new race car for it's maiden race, until they threw the half and half race at us.  Didn't want to take a brand new car into such a happening, so the Neon once again was suppose to run.  Got ready to put it on the trailer and it wouldn't start.  It did this a couple of races ago when I was sitting in staging waiting to go out for my race.  That's why we were actually going to put the Cavalier on the track and retire the Neon.  The problem with the Neon is an electrical/computer problem, which makes my crew chief (John) VERY unhappy and also racing friends that are trying to figure it out too.  So the Cavalier went on the trailer and to the track.

This is how it looked before the race. 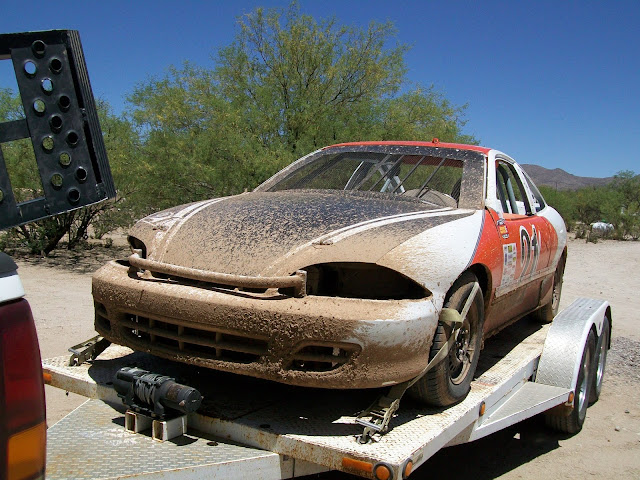 This is how it looked after the race..........BUT.....it did come home in one piece.  Had one close encounter and John popped the fender back out at the track.  I didn't really race, just survived, to hopefully do better next time.