He lost his companion a couple of weeks ago and we were asked to take him by the older couple.  They both have mobility and health issues and they certainly aren't in a position to take on another donkey.

He is about the most cooperative, curious, mellow and laid back donkey I've ever seen.  Have no idea how long he had been in that pen.  Suzanne put a halter on him, we put 2 leads on him, just in case, she led him to the trailer and he hopped in like he had just done it yesterday. 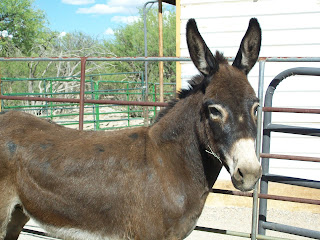 I was going to take a picture of him coming out of the pen, but he came out like he wanted to see everything all at once and I couldn't keep up...!!!  I'm pretty sure by the end of the day he will have seen everything there is to see on the property....  LOL 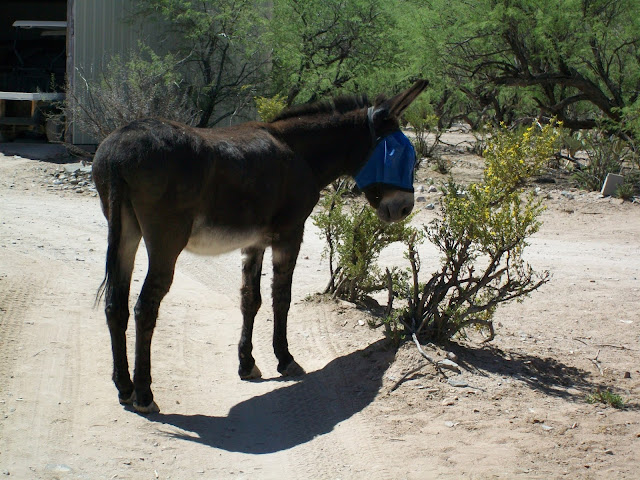 He finally slowed down enough to eat some greasewood (creosote) and I got a picture.  Not a very good one, but if he's going to keep moving like is has been, I can't be picky.......!!

Yesterday Suzanne and a volunteer groomed everyone including him. We didn't know how he would react but he LOVED being groomed, he stood like a statue for a long time, didn't want it to end.  This morning I went in his pen more than once and every time he ran over to the gate and leaned up against it so I couldn't get it open.  Guess he thought that would make more grooming happen....!!

Snooky, one of the 4 permanent indoor  cats got out last Friday.  He was born feral and has never really been domesticated, although he's lived in the house for about 10 years.  He's gotten out a few times before and after 3 or 4 days we could usually get him in.  So far this time, he will come on the porch, maybe look inside, but not come in.  I think Julius and Smoky the 2 indoor/outdoor cats have taken him under their wings and are showing him how it is to be an outdoor cat.  I worry about coyotes, although they don't spend much time on the property because of the donkeys.

The last few days we've had a professional photographer here.  He was here all day and said there was too much to photograph, so he came back a couple more times, even with a drone.  He's shared hundreds of pictures with us.  I'll share a link to his blog:  Roger Thompson Photo

As of yesterday everyone is now wearing a fly mask except BlackJack.  His face is so fuzzy, flies usually leave him alone.

This is the latest we've ever gone without putting masks on.  Usually by the end of March the flies are getting bad.  Hopefully between the fly masks, the fly traps and the fly predators, we will be able to keep ahead of them.  First day out, Boaz and LaRoy both lost their masks, but we found them.  That doesn't always happen, some masks we don't find for months and some we never find, have no idea where they go.