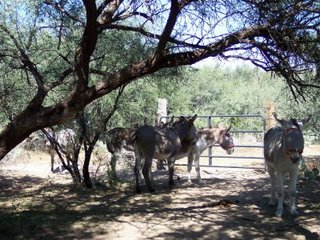 I'm not too happy with the gang today. This morning it was 28 degrees when we went out to feed. The only ones here were Max, the horse, Jack the mule, & BlackJack, big boss donkey...... Bennie & Nina showed up quickly. The rest of them were over on "Burroland", their 20 acres of freedom. During the summer when they are wearing fly masks they have to stay on the 10 acres where the house & corrals are during the day . The reason we do this.... it's much easier to find fly masks that have been used as toys on 10 acres, than it is to find them on 30 acres. The above picture shows what they think of this arrangement, the closed gate leads to burroland.

They didn't come in on their own, I had to retrieve them. Pepper was the first one I saw on my trek, so I haltered him & started back to the 10 acres. The others could care less, I ended up with just Pepper. Penned him, went back over & found Lucy this time. We usually use her as the Judas goat, since they all seem to acknowledge her as the lead jennet. Haltered her, & sure enough, they all followed in a single line. Then they all seemed to be upset that breakfast wasn't waiting when they got here. Believe me I was tempted to forget breakfast. Unfortunately they wouldn't care, the lesson would be lost on them, & the trees & bushes would suffer. Donkeys are browsers & love to munch just about anything including prickly pear cactus, & greasewood. 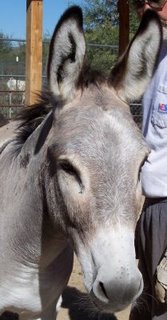 He figured out "targeting" quickly. It only took a few minutes for him to equate touching the target, hearing the click & getting a few timothy pellets for his effort. This morning I tried running my hands up & down his legs, & picking his feet up for a few seconds, then a click & a goody. This boy is a fast learner. I have no doubt he could learn to do just about anything you wanted to teach him.

Nina on the other hand, is very cautious. At first the clicking scared her. So we are going very slow, until she gets use to the sound. It loses something, when your trainee, takes off & doesn't wait for her reward. It might take her a few mornings to figure it out, but I'm sure once she figures it out, she'll be as good a student as Bennie.
Posted by Tish at 11:31 AM No comments: 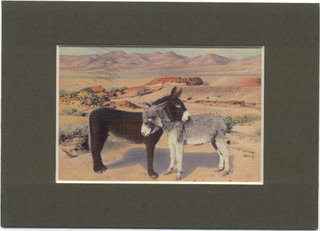 Our first Open House....!!!
The 1st week-end of December will be the annual Cascabel Fair. This Arts & Crafts fair has been going on for over 20 years, & hundreds of people drive out for the day to enjoy the San Pedro River Valley & it's uniqueness. Many vendors will set up at the Cascabel Clayworks & also at Ivan's a local painter. They are located about 13 miles farther north on the Cascabel road.
We asked if we could participate this year, & have been given the OK, even if we aren't located up where the actual Fair will be going on. We will put a sign out on the main road to let people know we will be open for donkey feeding & petting. Hopefully we won't have a lot of people show up at once. Since we're new at this open house idea, I'm sure we'll have to learn as we go along. So if you are in the neighborhood that week-end, stop by & say "HOWDY". 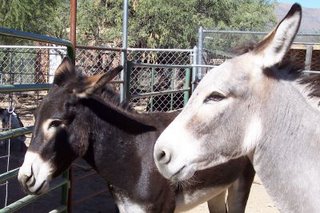 Today, is the first day of freedom!


This picture was taken just before we opened the pen & let them out this morning. Bennie is on the right, Nina on the left. Bennie is really a nosy guy & came out like he wanted to see everything all at once. Of course all the other donkeys, mules & horses were already out, & he seemed quite surprised at all these eyes looking at him. His answer was to kick up his heels & take off running. Nina followed at a more sedate pace, but I did see her running & bucking a little bit. The pen they were in wasn't that small, but obviously it wasn't large enough to exercise, at least by their standards. This afternoon they have settled down in the beautiful Arizona sunshine, & are resting under the trees, like everyone else. Around 4pm, we will start gathering everyone up for their evening feeding. Some of them go into pens, & some don't. I'm curious to see if Nina & Bennie remember their pen, & will go back to it. Or if we will have to "encourage" them. Something tells me, Bennie especially will be hard to herd in one direction. He seems to think running is a lot of fun & I'm too old to chase him effectively. Nina has some problems with her feet, although she seems to be sound. I've already gotten in touch with my trimmer, to see if we can help her. Her previous owner said she is a little difficult about her feet, so I will try some clicker training to see if we can make picking up feet a little easier.
Posted by Tish at 2:22 PM No comments:

Nina & Bennie have come to stay

We went up to Gilbert, south of Phoenix yesterday & picked up Nina & Bennie. They were rescues & the woman that had them, could no longer take care of them, so she released them to us.
Bennie is a curious, in your pocket, type of guy. Nina is a little more stand offish, & I can't blame her. Although she is only about 4 years old, at sometime in her life, her left nostril has been ripped open. It has healed, but she has a 4 inch open scar that runs from the top of her nostril up her face. It has collapsed & has a hard area inside which cuts off that nostril for normal breathing. She has been scoped, & above this area, is normal. Surgery has been discussed, & as you can imagine isn't cheap. But there is also no guarentee that it would help her breathe easier, so for now we will leave it as it is. She is a pretty girl, & it's a shame that this injury wasn't attended to when it happened, so she wouldn't have had to go thruout her life, so disfigured.
Bennie thinks she's pretty cute & stays with her constantly. They will stay in a pen for a few days, until they get use to new surroundings, & then will go out with the rest of the gang.
Posted by Tish at 9:41 AM No comments: 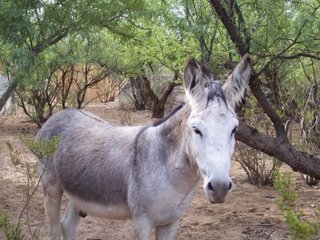 A group of visitors came to visit the donkeys today. Pima Community College gives tours of local areas of interest & have been coming out to see the donkeys for a couple of years. The people always seem to enjoy seeing the donkeys & hearing their stories. The donkeys really like to see a group of people drive in the driveway. They have learned that a large group of people showing up, usually have come to see them. We furnish small bags of feed for those who would like to feed the donkeys & it doesn't take long for them to figure out which people are "goodie" dispensers. Most of the donkeys enjoy the game as much as the people. Some of the donkeys still aren't trusting enough to wade into a group of people, even for food. Occasionally one that has been stand offish decides to "try" it & we have a break thru. Shiloh is one that has recently started standing very close to the people although he won't go to the people. But he will stand his ground if someone wants to walk over to him & offer treats. Hopefully soon, he will wade right in with the more precocious ones, to get his fair share of the goodies.
Posted by Tish at 2:40 PM No comments: 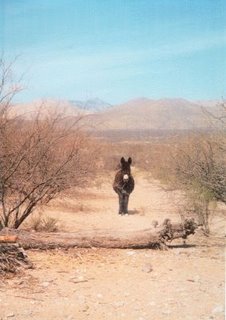 BlackJack surveying his domain
Posted by Tish at 6:42 PM No comments: 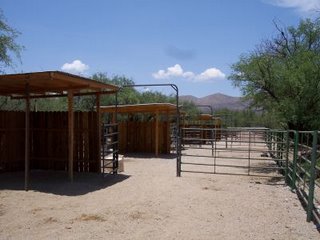 We have 2 more donkeys coming to stay next week. It's exciting to meet the new ones & have them learn their place in the "herd". But it's sad to know the reason they are here, is because they are probably unadoptable by most standards. I don't know much about them yet, but do know they are young, & one is physically disfigured. 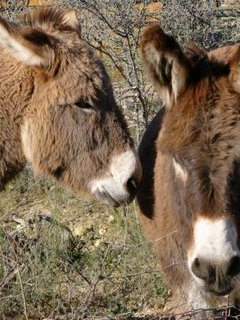 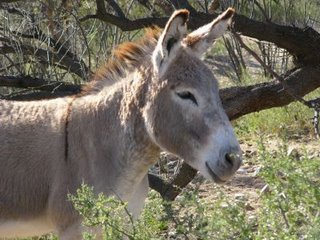 
Donkeys, horses & mules are classified as livestock, rather than companion animals.
Posted by Tish at 9:22 PM No comments: