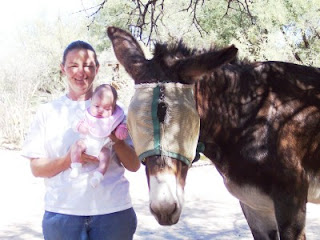 Katie is teaching her granddaughter how to trim at a young age..!!! Actually once the baby had a bottle she slept thru what we were doing.

Sugar was fascinated, when the baby made a noise. She tried to get in Katie's truck to see what "it" was. Finally had to run her off.

Jenny's feet are still improving, although it's going to be a long time before they look "normal", if ever. She is still walking good, so Katie was pretty conservative in her trim. Lucy, Pepper & Mirage also got pedicures..............!!!! The others are real good about keeping their feet worn off. Some of them haven't been touched in years.

We barnstormed ideas on how to trim Chester's feet. He can't stand on his bad shoulder at all. Our best idea is to get a large animal sling to put him in, to trim his feet. They also make a tilt table you can strap them on, but they are quite expensive. Katie said we might try cutting grooves in the long part of his feet, to encourage them to break off on their own. We will probably try cutting the grooves, if we can get him to stand still for such an insult. He seems to have definite ideas on how he should be treated. But eventually I'm sure we'll have to try a sling.
Posted by Tish at 2:00 PM No comments:

Doesn't seem to be much going on around here right now. Everyone is fairly healthy, the only one I'm doctoring every day is Jenny. Chester had to stay in all day yesterday, we left for Tucson before he got thru eating. This morning he was 3 legged lame. So being able to move around is going to be very important to his comfort level. I've been trying him on different herbs to see if one helps more than another. So far nothing seems to work very well. But we'll keep trying. He moves pretty good once he takes a few steps & is willing to move around, so I don't think he is in pain, so much as the nerve damage & muscle atrophy causes, use of that leg to be awkward. It's sad to see such a beautiful sweet natured animal, crippled for life because he wasn't taken care of when his shoulder was originally broken.

This morning when I let everyone out, he went thru Sha'ba's pen before Sha'ba got out. The next thing I know they are standing almost side by side eating Sha'ba's leftover hay. I don't think Sha'ba has ever allowed another donkey to get that close without him taking off. He must realize Chester isn't a threat to him.
Posted by Tish at 12:29 PM No comments: 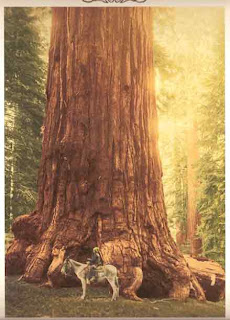 Yesterday at Donkey Dinner time, John was rounding everyone up & heard someone moving quickly in the wash. Turned around & it was Jenny, walking fast. He was quite excited considering it hasn't been that long since she had her back legs up under her to keep weight off her front legs as much as she could. I wish I had seen it, hopefully it wasn't just a fluke & she will continue to improve.

I worked with Miss Tula this morning. I've found out if I don't work with her on a regular basis, she reverts to being wild & stand offish. Molly mule was in her pen next door & had a fit, because she wasn't getting to play. So after I finished with Tula, I let Molly out of her pen, asked her to walk next to me, which she did. Asked her to stop, she did & thought I'd try having her back up. She also did that. I don't know how much Anita worked with her, I wouldn't think very much. She was either sick, or recuperating almost the whole time Anita had her. I've never been around a young mule before, but she seems to be smart as a whip, & catch on to new things very quick. I hope we can find a good home for her.
Posted by Tish at 11:35 AM No comments: 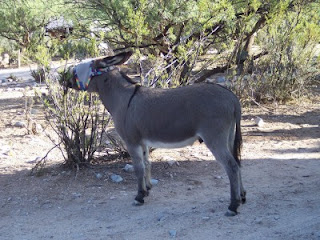 The days are warm & sunny, the nights are cool enough to make great sleeping weather.........!!!! This is the type of weather that brings people to the desert.

Everyone seems to be doing pretty good right now. I wish I knew if Chester is in pain with his broken shoulder or not. He moves around abeit limping. But he also lays down quite a bit. I don't know if he is giving the leg a rest or if he's just lazy. His owner said he has always laid down a lot. I am trying different inflammation supplements, to see if anything makes him more comfortable. He's alert & active, but without x-rays we really don't know where or what the problem is.

Jenny is still walking good, I haven't seen her shifting weight from one front foot to the other in quite sometime. I'm still doctoring the proud flesh on one hoof, but it seems to be under control.

In a couple of weeks I am going up to Buckeye, AZ to a horse clinic put on by Clinton Anderson. We watch his program on TV & I don't think much of it pertains to donkeys, but it will be fun. I'll be camping out in the Van for a couple of nights. John will be doing chores by himself, hopefully by that time fly season will be winding down, & he won't have to put masks on. He'll have plenty to do, feeding & picking up poo.

I'll also get a chance to meet a woman I've known for a couple of years, via the internet. She runs a private sanctuary for mini horses & donkeys not far from where the clinic will be held. We've exchanged phone numbers & what shirts we'll be wearing, so we can find each other. I, of course will be wearing a donkey shirt, so I shouldn't be too hard to locate, in a sea of "horsey" people............!!!!!
Posted by Tish at 1:54 PM No comments: 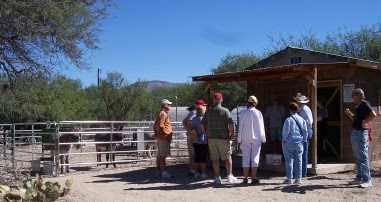 Now that the weather has cooled off, we can expect more tours. The last couple of days Alan Kruse has brought 2 different groups out from Tucson. The donkeys really enjoy tours, we give the people cups of timothy pellets, & it doesn't take even the new ones long to catch on. Molly Mule was absolutely silly today, pawing & running back & forth on the fence. I told the people that's the reason we have them in pens when people come out. Molly would have been a real brat if she had access to all the people at the same time. We use to let them out when people were here, but decided someone might get hurt. Most of the people have never been that close to a large animal, & wouldn't know how to read the body language. Besides if the animals had unfettered access to the cups, I can imagine what would happen. Let's just say, possession of the cups would probably move from people to donkeys.........!! 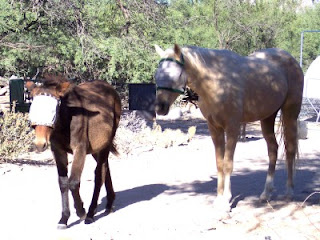 This is Molly Brown with her big brother, Mirage. It's hard to get a picture of her, as you can see she was walking towards me. Anytime she notices you, she always comes to see what you are doing.

Yesterday morning, when I opened the pens up, Chester went into Sha'ba's pen to clean up the hay. All of a sudden I heard a loud commotion in that pen. Molly had come in to also clean up hay, & had poor crippled Chester trapped in the shelter. She is very quick with her feet, & was kicking him just as fast as she could. I ran to break it up, & he came out not putting any weight on his bad leg. I don't know if she kicked him on that leg, or if he hurt it, trying to protect himself. He's still not putting much weight on it this morning. He only eats hay & hay cubes, so it is really hard to give him anything like bute or yucca, which is good for inflammation. I've tried all the tricks I know, next time I go to town I'll get some baby food strained carrots. He likes carrots, but he doesn't seem to like wet mushy food. Applesauce was a definite NO-NO, he acted like I was trying to poison him. Most of the others, will do just about anything for apples or applesauce.

I think the next time we have a Vet out here, I'll have him x-rayed to see exactly where the damage is. It's too late to do anything about it probably, but you never know. He's such a good natured guy, & we want to make sure he is as comfortable as possible.

Terry came to groom yesterday. Sugar is such a squirmy girl, she couldn't stand still long enough to get groomed. Rather than tie them up, Terry walks around & if they stand still they get groomed. After Belle got groomed, she kept getting back in line to get groomed again. She is such a sweet gentle girl, I'd like to find a good home for her & Shiloh, so they could have a family of their own.

It was 39 degrees this morning, hopefully it won't be too long before we can forgo the fly masks.
Posted by Tish at 9:29 AM No comments: 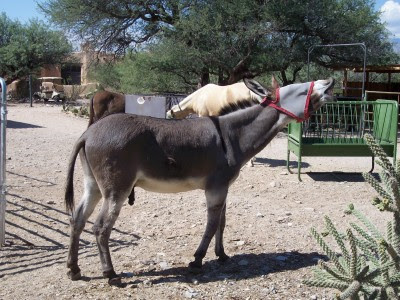 In this picture he is phleming, or flehmen, depending on how you want to spell it. In the background is Mirage on one side of the bunk & Molly the mule on the other. She's brown & rather hard to see.

He's getting along with everyone, roaming around doing his own thing & seems to really be enjoying getting out. Yesterday he was laying in the wash sunbathing, like BlackJack does. He must feel safe to lay out on his side like that.

So far we are only letting him out during the day. Again, last night he let John know he wasn't interested in going back in his pen, at feeding time. I think they made about 4 laps around the pens before Chester finally gave up & went in gracefully. I'd like to make sure his leg is doing OK before we let him out all the time. If he gets along OK, & so far I see no problems, he will probably end up eating out with Buster, Lucy, Belle, Shiloh & Sugar. There's no reason for him to be in a pen to eat, unless he needs downtime to rest his leg.
Posted by Tish at 9:04 AM No comments: