We had noticed Justice has issues with his right rear foot.  He has somewhat of a limp, not bad, and his fetlock seemed loose.  His feet had not been trimmed in awhile and that foot was not pretty on the bottom. 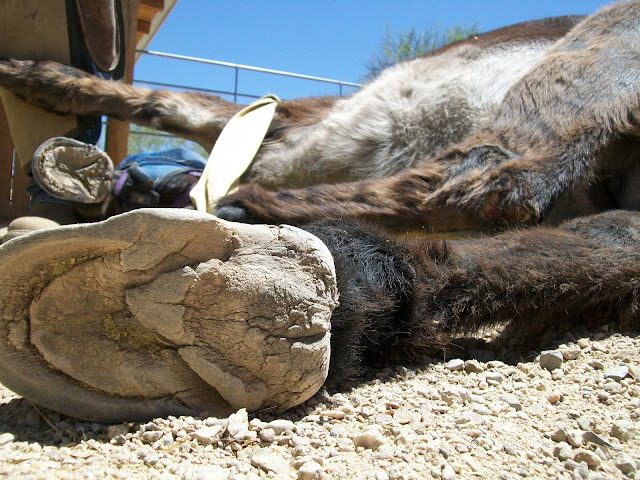 He's on the ground, I guess I bragged too much on how friendly and cooperative  he was. right after we picked him up.    Dan showed up to trim and it became rodeo time.  Dan said "no problem" brought out a cargo strap made just for the occasion, put it around Justice's neck and in the ensuing battle Justice he lost his balance.  Dan said "no problem" I'll do him on the ground.  Dan doesn't get excited about anything........!!! LOL

Dr. Jeremy came out to do x-rays and unfortunately he has 2 bone chips in that foot, one off the navicular and one off the other side.  The tendons are probably stretched which accounts for the "loose" fetlock motion.  What I got from the discussion was we don't know how long it's been this way.  He had been in the home we got him from for about 9 years, he's about 20 years old, so it isn't a new problem.  Dr. Jeremy's best guess is roping damage, especially with the way he behaves about ropes and he is very protective of that leg.

So what to do about it?  He mentioned 2 ideas, both over my head.  We'll probably talk with Tyler and see what he thinks.  We will need to get him more comfortable having a trimmer/farrier work with him.  Something tells me he hasn't had a lot of foot work done in his life.

The sad thing is a woman in Silver City was interested in adopting him as a companion for her donkey.

Animals don't get to choose their people, if they could there would be a lot of people without animals in their lives, which would probably be a good  thing..........!!!