Last week-end was the start of the pack burro racing season in Colorado.  The 1st race was in Georgetown on Saturday and Sunday they raced in Idaho Springs.  One race had 84 teams running, I would imagine the other one was about the same.  It seems like every year the team count goes up, as more and more people discover this amazing past time which has actually been going on since 1949. 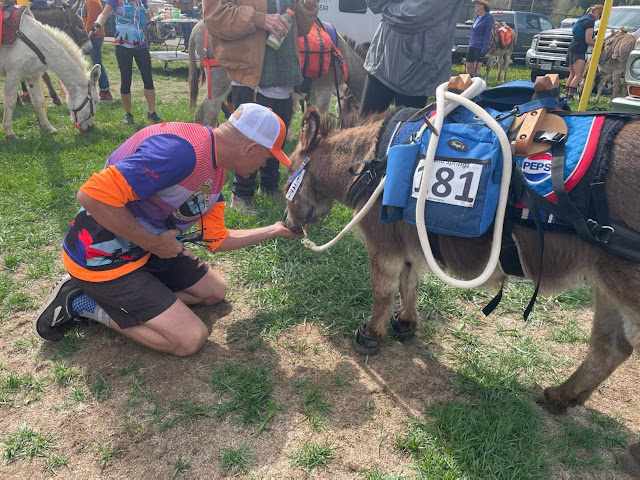 This is Lynn with Pepsi, one of our alumni.  Pepsi was adopted in Colorado a couple of years ago, and has been having a great time ever since.  He's been to school, played in snow, has his own little girl to play with and is involved in a program where children can write to him and he will correspond with them.  We hadn't had an update in awhile on Pepsi, so was glad when Linda said they saw him at the races this week-end and gave him a hug.  I think this desert boy is living the dream in Colorado......!!

. A nice picture of the start of the race, it is hard to tell who was leading from some of the donkeys, the donkey or person. Justice has a bad looking foot, hope the vet can at least make him comfortable. We are having rain and we need it so bat, A man told me tonight he was hauling water for his cows, the creek is dried up, an unusual thing for that creek. Hope all is well with you guys, I know you miss the Colorado people.

The donkeys and people usually take turns leading. Some of the well trained donkeys know the job and just keep moving, the people usually just stay behind. But if one decides this wasn't what he had planned today the people usually get in front and try to tug on the donkey, which is rather futile......LOL

We haven't had measurable rain for over 2 years. All the desert plants are starting to look stressed. We were hoping for a crop failure of mesquite beans this year, but the trees are loaded with blooms. So it looks like another fun filled summer of keeping the donkeys away from the beans.