Linda, Suzanne and Lynn have been busy for the last couple of days preparing for the trip to Ridgecrest, CA for the California Breakfast Burritos annual burro race.  It's not as easy as throwing a bunch of stuff in the pickups, hooking up the trailers and hitting the road.

All the pack saddles have to be fitted to the burro that will be wearing the saddle, to make sure the cinches are the proper length and all the straps are in good shape.  That took most of yesterday into the night.  They are taking 2 trailer loads of donkeys so that is a lot of equipment.

It will be a 2 day trip to get there, it's not actually that far, but they usually do about 300 miles a day, so the donkeys don't have to spend hours and hours standing in a moving trailer.  I would imagine once they get there they will be non-stop, until time to come back, Sunday or Monday.  Makes me tired just thinking about it.......!!! LOL 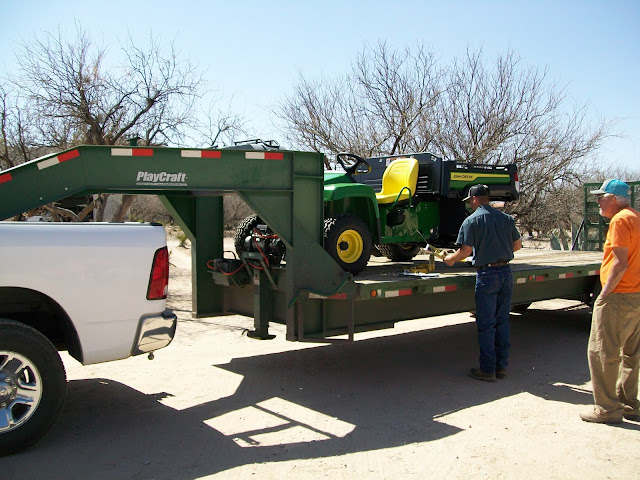 John has a new toy to play with.  We finally figured out a way to get rid of the poo.  It's amazing how much poo a bunch of donkeys can manufacture.  We always say we know they make more poo than we feed them.....!!

We have a friend that picks up poo for us and also owns a Gator.  Her brilliant idea was with a Gator we could haul the poo to a big hole in the ground over on the 20 acres we call Burroland and dump it.  We looked for a used one and decided that people don't sell them very often.  So we bit the bullet and bought a "new" one.  There went our stimulus check, but I'm sure John Deere appreciates it.....!!!

Sure was a pretty little thing all bright and shiny.  The 1st thing we did was fill the dump bed with poo and haul it over to Burroland.  The dump bed is really nice, you don't have to be big and strong to dump it, which means I might even be able to operate it........!!

The local paper, the Sierra Vista Herald did an article on the donkey rescue last Wednesday, March 31st.  It was a pretty good article, this is one of the pictures they took of John and I.  Here is a link to the video they put on you-tube.   https://www.youtube.com/watch?v=ozI6-RalZ5w 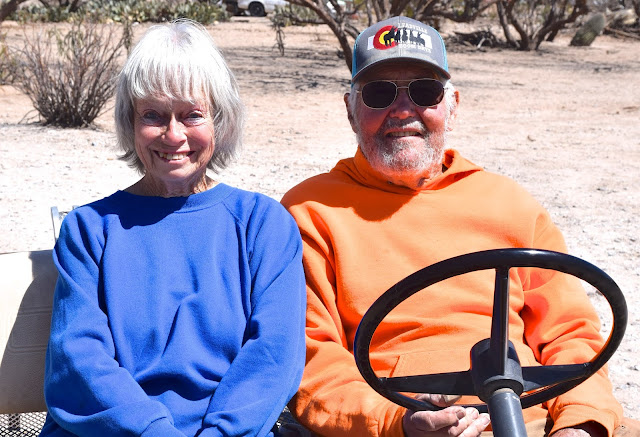 For anyone that hasn't gotten to see a burro race, it's hard to imagine what the start is like.  It's chaos, with donkeys running, or not, depending on how they feel.  Loose donkeys with their human team mate not expecting such a fast start.  Once they settle down and get away from so many donkeys and humans, crammed together and get strung out over the trails, I'm sure it's a lot of fun.

But in the meantime, it looks like a big mess with lots of moving parts..........LOL  This is a video a young man posted on Instagram after the Black Canyon race, it was his 1st burro race.  He and Koshare finished 2nd in the 9 mile race, so they obviously worked as a team after a rough start.  Well, it looked pretty rough for the human, I would imagine Koshare was having a great time.  Some of the language is a little salty, but under the circumstances not surprising......!! LOL  There will be the picture below of the Koshare Team, then a video, another picture and the 2nd video is of Ruairi's 1st race start. 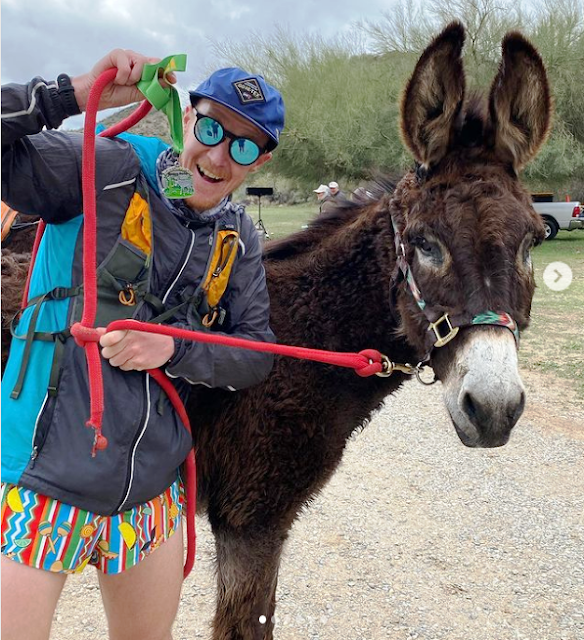 Not sure if this was taken before or after the race, but they both look like they were having fun.  Thank you Ruairi for such a great video.  If they had been 6 seconds faster they would have won.  As it is they got beat by a "girl" named Marshmellow .......!!

The trailers just pulled out of the driveway headed for California.  The reason Lynn stopped out on the road was to retrieve a fly mask, one of the neighbors hung on a post.  That's what they do when they find one outside the fence.

I imagine the young man with Koshare might have a few scratches on his legs when the race if over. The picture of you and John is very good and I love the new toy. Anything that makes life a little easier as the days pass and birthdays pass. I enjoyed the video's with my coffee this morning. Good luck with all the runners, prayers for safe racing and travels.

You have to admit though, the video gives you an idea of what happens in these races sometimes. We'll never really know how it is, but sure is fun to "run" along with them.

Yes it looks like fun for a younger person, at 76 I don't do much running. I would need an old very slow donkey that need to stop and rest often. I did yard work today and my back told me it was time to stop.

But you're still getting out there and doing it. There are actually people about our age racing burros. Bill Lee is in his early 70s and he runs the long courses. He might not be fast but he always finishes.