NEWS ARTICLE ABOUT THE DONKEY DASH IN TOMBSTONE.........

Nice article about the donkey race Saturday in Tombstone.  Everyone seemed to have a good time.

This morning about 4am, about twenty of the donkeys that were in a large pen with a bunch of other donkeys had a "great" time.  Someone figured out how to undo the chain that was holding the corral panel together and a bunch of them escaped before Lynn and Linda sleeping about 15 feet away figured out the donkey noise was getting farther and farther away.  They broke open a bale of hay and chummed most of the criminals back into the pen, by throwing flakes of hay into the pen.  So everyone got an early breakfast, including the ones that didn't get out.

We aren't blaming anyone in particular, BUT, our Frijolita is really good at undoing chains.  She's been known to undo her gate, and just stand in the pen until someone shows up to see what she has done.  She's also been known to go around and open everyone else's gate, so they can enjoy her highly specialized skills.  She was in that pen and was one of the escapees, so what are we to think...??  LOL 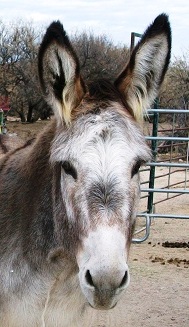 Does she look guilty?