I hate to keep harping on Gus, but he seems to be the one that gets in or stays in trouble.

I took this picture this morning while he was enjoying his breakfast.  I was at a distance, wish we didn't have to get close to him to throw hay and mush in his feeders.  Be glad you don't have "smell-a-vision". He managed to find a skunk to play with last night.  I assume they were close friends during the encounter, because he STINKS.......!!!  Poor Cochise is his closest neighbor, but neither one of them seems to be bothered by the smell.  We have a couple of tours today, which should be enjoyable, I think we'll probably speed past Gus, which will really disappoint him, he loves to have people to entertain. 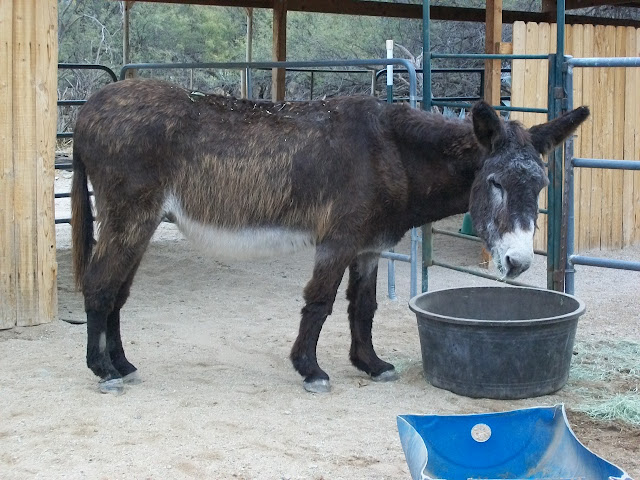 Everyone else seems to be just fine, but there is a change in the dynamics of the herd.  Jasper and Rosie have been hanging together since Gigi died.  John said he has seen Rosie hanging with the mini girls, Sasha, Mamacita and Bella.  Well Bella isn't really a mini, she is a small standard, but she has become a head jenny of the mini girls.  I guess Rosie is trying out a new herd.  Not sure what Jasper will do, maybe he will go with them.  He's never shown an interest in hanging with any of the other geldings.

Tula is the head jenny of about 6 of the jennies and geldings, but none of the above have ever been part of that herd.  It's interesting to see the dynamics in the group.  Cochise is somewhat of a loner, but sometimes he hangs with Justice and Boaz.  He and Justice like to play fight and they play rough enough to draw blood.  Ears seem to get involved a lot of times and they aren't very durable.

We did not smell anything out of the ordinary with sweet big ol’ Gus. What a smart old man he is ;)

Well if anything he's never boring........!! LOL John and I both ended up by the end of the day smelling like a skunk from him pushing on us every chance he got. The indoor cats loved it I guess, they gave us a complete body scan when we came in from chores last night.

Gus you stinker! Did he get a shower?