We went to some friend's house last night for dinner.   Sunsites was suppose to have fireworks, but the weather went really bad and they were cancelled.  We were suppose to be there at 5, but when they cancelled moved it to 6.

Just as John went out to round up all hell broke loose, 50-60mph wind, heavy rain  (1.12 inches in the rain gauge ), couldn’t even see the Little Rincons west, actually couldn’t see anything much past your extended arm.  Blew the hay cart over, believe it or not, the cart stayed attached to the golf cart and didn’t break it.  The bungies even held, so it was laying on it’s side with buckets intact.  The hay in the top buckets is in Safford or maybe New Mexico..........!!   We just left them like that, the bottoms were to the wind, which protected the rest of the bucket while we figured out how to feed and survive…..LOL  Harley and Buddy’s buckets flew into the wash, just found Buddy’s this morning.  Our neighbor Vic lost a couple of mesquite trees.  It’s been a long time since I’ve been that wet, with my clothes   on.

Found out this morning Casper the little white mini mule's shelter has a couple of loose metal 10 foot strips that covers his quonset hut shelter.  They are still up, but a little twisted.  John checked all the shelters and Casper's was the only one damaged.  But most of the pens had water standing in them.  By this afternoon the water was gone, but the pens are pretty muddy, reminds me of slugging thru mud to take care of my ducks, chickens and Ringo my horse, before school.  At least we don't have snow to contend with.....!!!!

The donkeys are really being good about coming in I guess because of the weather.  Many times they are in the pens, but not always their pen, which causes issues with the perceived owner of the pen.  Some of them don't mind, a few of them really have an issue with "squatters" and let them know it.  I'm sure you're not surprised that Big Gus is one of the most possessive about his pen. 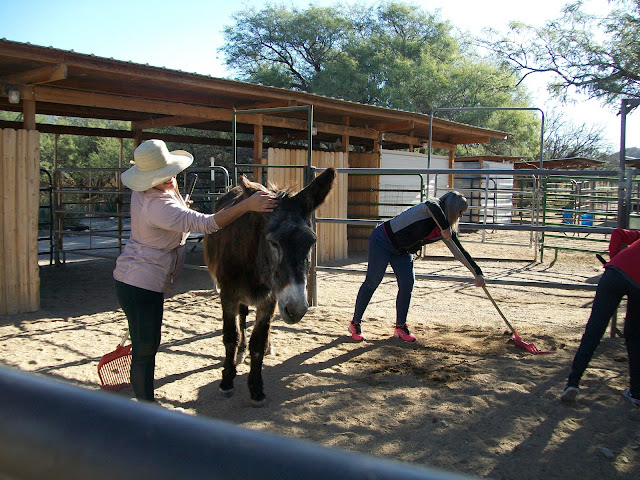 Gus enjoying having volunteers available to take care of his needs, getting groomed and picking up poo.  He had a good momma, she taught him to poo in the same place every day makes it easy to pick up.  Some of them like Frijolita walks as she goes, she can leave a trail over 50 foot long and does almost every time.

Gus actually does not like donkeys, he much prefers people.  I would imagine he has spent most of his life with horses.  He usually just ignores the donkeys, occasionally he and Casper the little mini mule chase each other, which looks pretty weird.  Cochise for some reason likes to hang out in Gus' pen in the afternoon.  They share one side of their pens, don't know why Cochise doesn't hang out in his own, maybe he likes seeing Gus' have a tantrum.....LOL

We have 2 indoor/outdoor cats Julius and Smoky and Julius has been missing the last 3-4 days.  We were afraid he had outlived his desert smarts that have protected him for over 10 years.  His mother a feral cat had litter after little of kittens for 3 years before we finally caught her in a live trap and had her spayed.  Only 3 of her offspring survived.  Two of Julius' brother are indoor only cats, Hobo the mother cat turned up missing not long after she was spayed and Julius chose to be an outdoor cat and probably didn't come in the house for the first 5 or 6 years after Hobo disappeared.

All the donkeys seem to be good, most of them are a little cranky about the weather, can't blame them.  They hate to be wet, but no one is limping or have hair missing or wounds from play fighting.  Still have a few flies when the days are sunny, haven't have many flies the last few days.  It's suppose to get into the teens over the next couple of nights, which means breaking ice in the morning on the buckets in each pen.  They have two water sources that are heated out of the pens, so the water in the pens isn't all that important.  In fact even if we get the ice off their buckets, a lot of them wait to drink till they have access to the warmer water.

Wow! Sounds like you guys got hit hard with the storm. Glad you and donks are ok