Beefy got here yesterday morning.  He's a real pretty Catalonia mammoth, probably weighs about 800 pounds.  He's not a lot bigger than Gus, maybe 2 or 3 inches.  He's a lot louder than the other donkeys.  The owner said he's never bit or kicked or shown any type of aggression to man or beast.  We let him out of his pen this morning for an hour or so by himself so he could figure out escape routes if needed later.

His pen is next to Gus, so that was the first hurtle.  Gus doesn't like other donkeys and certainly not new ones.   And he wants to make sure everyone knows his opinion.

Actually after we let everyone out, Gus minded his own business, but not so with Cochise and Siggy.  Siggy the little micro mini chased Beefy all over the place.  Most of the minis have a Napoleon complex and don't seem to know they are little.  Cochise spent a lot time chasing him all over the place too.  We'd go out and check every half hour or so and someone was usually chasing him and he was just trying to mind his own business.
My main worry was the jennies.  He's only been gelded a month tomorrow and has bred both mares and jennies, so he knows what he was put on the earth to do.  Ruthie, Tula and Frijolita stalked him for quite sometime, single file, looked like a bunch of vultures, he ignored them just like he tried to ignore the boys.
The last couple of times I've checked on them, he's been by himself eating greasewood and the others are dirt bathing, eating or just standing around waiting for something to happen.
The one I worried about was Casper the little mini mule.  He likes donkeys better than horses or mules, but I did see him get close enough to Beefy, when Beefy kicked back, he got his leg caught on Casper's back for a couple of seconds.  Since then Casper has been hanging with the girls, which is where he usually is.  When he is in attack mode, he can really be nasty, he isn't playing, he's serious about wanting to hurt them.
John closed the gate to Burroland this morning, we don't know if he will be good to go back in his pen at feeding time later this afternoon.  If he goes in without drama, we'll open Burroland in the morning and things will be back to normal.
Here's some pictures of Beefy,,,,,,,,,, 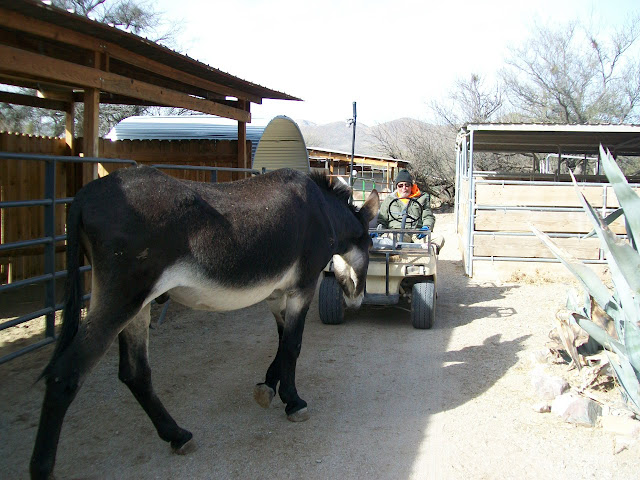 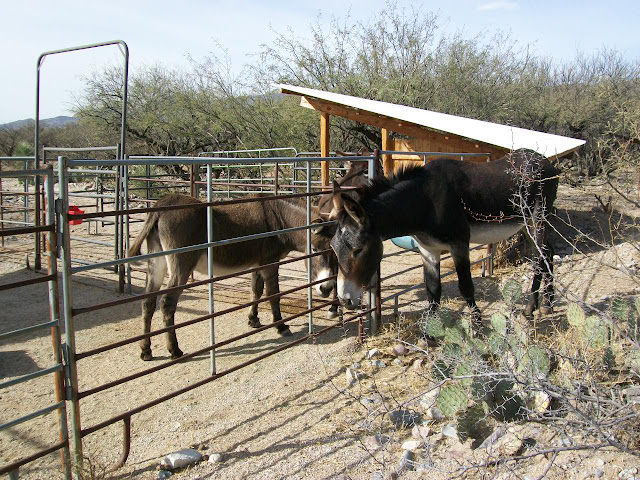 Visiting with Boaz and Justice 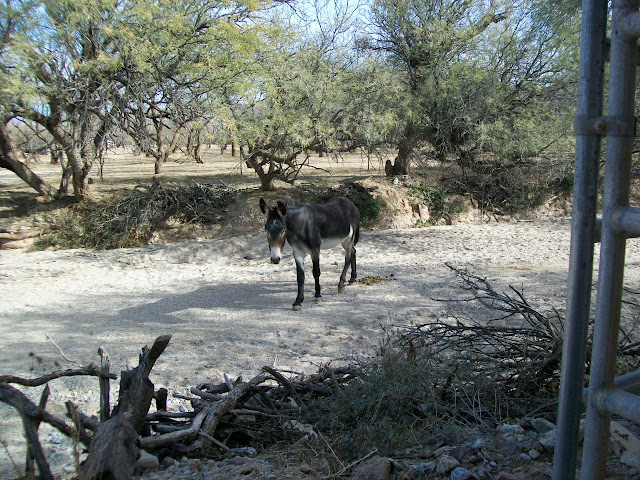 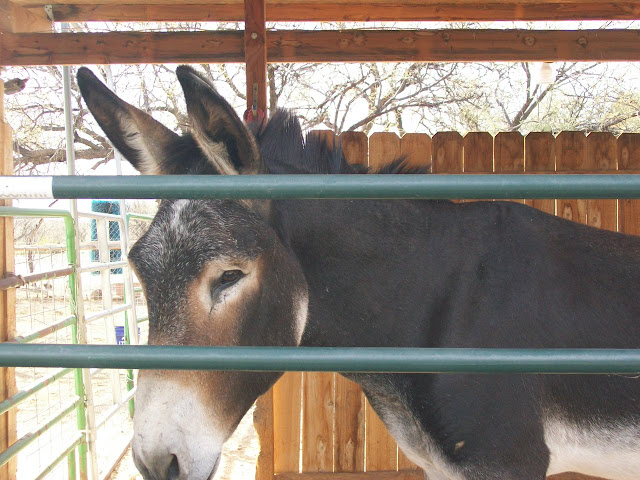 He is so pretty. Hope everyone lets him alone in a day or so. Everyone needs to try the new kid, see is he runs, kicks or what. Nice pictures, where did he come from?

Siggy the little micro-mini is still stalking him and getting in his face or trying to if he thinks he can. Actually he's usually arguing with Beefy's knees, there's no way he could get in Beefy's face.......LOL Minis are so full of themselves. Beefy just ignores him, he really is gentle and goes along with whatever is happening.

The owner called to see if we would take him. I asked a few questions, found out he has a twisted front leg, it toes out and he windmills it when he moves. She said a farrier twisted it and he hates farriers......oh! goodie! I don't know if I believe that or not, but he wouldn't be a good prospect as a riding donkey. People will take minis or even standards that can't be used, but mammoths usually are expected to earn their keep. So he will probably be in sanctuary. He was an intact jack, I told her we don't take jacks, so she had him gelded in Dec. When we have tours and talk about the 3 sizes of donkeys, people usually look at Gus and comment on how big he is. So now they will be able to see a mammoth.

I can see the front foot in the third pic, it looks turned out even in the pic. He is still a handsome boy and probably turned out some nice babies in his hay day. The rest of his life will be good, food, love just no sex. Thank you for reading my posts and I really enjoy your blog. I have learned a lot about donkeys and how much you do to help them.