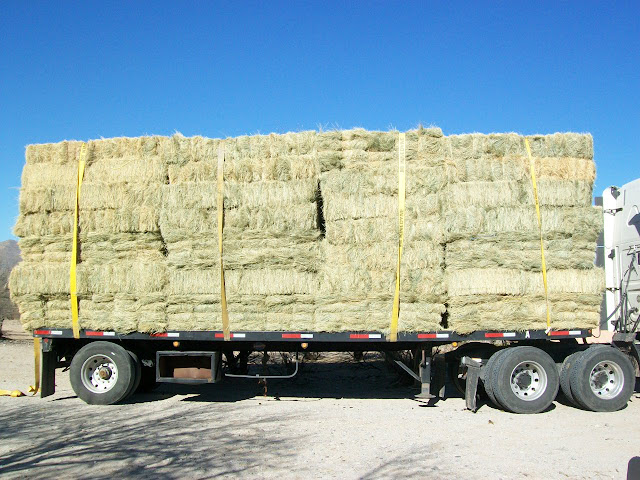 Today was hay delivery day, one of the donkeys favorite days a couple of times a year.  As most of you probably know lately the prices on everything has been going in the wrong direction.  With the price of seed, water, electricity to run the irrigation wells, etc, not to mention the price of gas to haul hay from the west side of Arizona, the hay delivered today was over $2.00 a bale higher than it was in June when we got the last load.  The price of hay at the feed stores, is in the neighborhood of $21 a bale and will probably be higher in a couple of months.  The broker said some of the farmers have said if the foreign buyers ever stop buying hay, they will probably quit growing it.  I guess they pay even higher prices than local buyers.  The problem with hay if there is a shortage, drought or like in Texas a few years ago massive fires everywhere, the prices go up...........but they never go down.  Once people are willing to pay the higher price, there's no reason to lower it I guess.  😠

Well, forget what I said about Beefy being a gentleman around the girls.  Today Ruthie decided to give him the eye and he took it seriously.  Boaz or Koshare couldn't tell which one, things were moving too fast decided to protect her virtue.  After about 10 seconds of pretty serious yelling, screaming and biting, whichever one it was, decided she was on her own and left the area.  I might have read that wrong, but neither of those 2 have ever showed an interest in the girls before..........!!! LOL

We had to go to Benson today, so Ruthie got to stay in the pens and Beefy got to hang around like a lovesick calf.  He is usually easy to work with and goes in his pen at feeding time, but tonight he was bound and determined to hang around Ruthie's pen.

He's 15 years old and has only been gelded since early December.  He also has bred mares and jennies, so he's been there, done that.  It's not surprising that he would remember the good old days, they weren't that long ago.  Tonight Ruthie will get to go out and he will have to stay in, at least I hope he doesn't challenge our pens, they probably aren't up to the strength of a determined mammoth if he wants out.  If the party continues tomorrow, I brought out the Vicks to put in his nose for a few days or until Ruthie stops acting like a silly teenage girl.  That's an old trick used when a stud is going to be around females that might think the boys are just their type.

Maybe your readers need to start a go fund me hay account. I hope you have some big supporters to help pay for that. Hay is a little cheaper here on the east coast. We are going through a very cold spell for Florida. Strawberries are just coming on good. The farmers will spray water over the firlds when it gets near freezing and ice will form on the plants and berries, that will protect them from going below the freeze point and save the crop. the fields are beautiful but the farmers will be glad to see the ice melt and ripe red berries. This area provides 70 % of all berries in the stores right now. Most will say Plant City, Fl. on the box.

People that come on tours are usually generous, we don't charge for our tours and really appreciate when they donate. A load of hay lasts about 6 months and usually donations pay for it.

My mother and daddy live between Inverness and Floral City for about 10 years. Daddy had 2 greenhouses and he raised hibiscus and grafted them. At one time he had over 5000 plants when I was down there. There is even one named after him. Mother was into roses, she liked to show them, I guess they have quite a few flower shows in that area.