Well I'm still running back and forth to spend the day with John and Suzanne is holding down the home front and taking care of the donkeys, cats, feeding John's wild birds and must not forget Charlie, an old heeler someone probably dropped off in the neighborhood and he managed to find the rescue.  He'd deaf as a post, cataracts on both eyes, and has settled in quite nicely.  We'd like to take him into the vet for evaluation, but haven't had the time yet.  I doubt that he is chipped, he looks healthy and since Suzanne has been taking care of him, he seems to think she's a pretty good friend.  Suzanne put out flyers in the neighborhood, but no one has asked about him.  He'll have to stay in the dog run, the cats would have a meltdown if he came in the house......!!! LOL 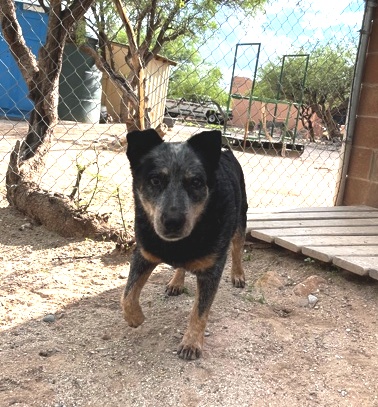 I think John is doing good, of course he doesn't.  He went into a rehab center yesterday, in fact the nurses at Banner were thrilled he was going into one of the top 2 rehab places in Tucson.  He had only been up once in the hospital, and yesterday when he got to rehab they didn't do anything except put him into bed and ask him a lot of questions.  Today was a different story.

He had a shower and stood up by his bed twice and was pretty steady on his feet, although he complained a lot.  No cast, or brace or anything, just bandages and they are pretty minimal.

I don't know how long he will be there, but if determination counts for anything he be doing as much as he can to get out of there I'm sure.

Boaz is one of the donkeys that has a problem with summer sores, fly damage and anything else that can cause sores that the flies love.  Speaking of flies is everyone else having a bigger fly problem than usual?  They are absolutely horrible this year.  I hung 2 new fly traps out in the last 3 days.  When I got home from Tucson tonight I checked on the 5 bags I have hanging.  The new ones are small only suppose to hold 20,000 flies.  The one I hung 3 days ago if full, the one I hung yesterday is about half full.......!!!!  Can't imagine what it would be like around here without the fly traps and the predator wasps, that parasite fly eggs, which kills the developing fly maggot..........!!!  YAY............!!! 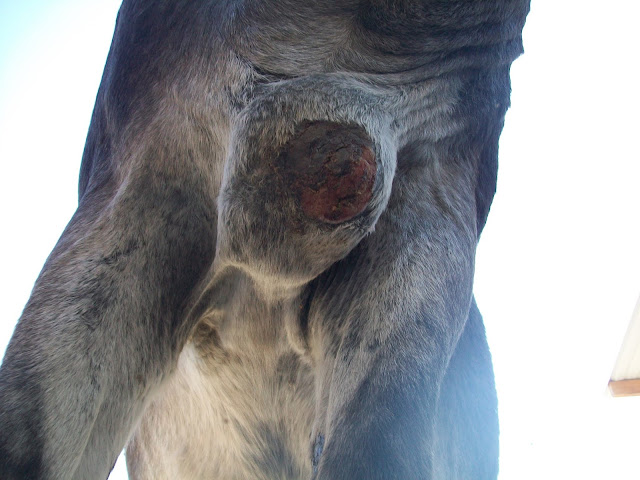 I know this is a weird looking picture that might be hard to identify....!!! LOL  That is Boaz's 2 front legs, with his belly behind them.  The big round circle in the middle is a problem area he has had for years.  It started out about the size of a quarter and every year it gets bigger and bigger.  Linda and Lynn took him to Colorado a couple of summers and Linda didn't even have to doctor him up there, the difference in climate or temperature or something really made a difference.  The day before I took  this picture the swollen area went from front leg to front leg, it was huge.......!!!  Two rounds of antibiotics really made a difference in the swelling.  It's probably less than half the size it was in this picture now. Sure will be glad when the weather cools off.  He'll get about 4 more days of antibiotics, hopefully the swelling will be gone by then.
This morning Suzanne had a surprise when she went out to start roundup...........Justice was in the feed room snacking on senior feed.  Her first thought was we had forgotten to shut the door or not got it latched when we pulled it to.  Ran him out, started rounding up donkeys, looked back at the feed room and he was working on the door knob.....!!! Hmmm.............pretty much answers the question of how he got in the first time.  He has learned how to open the door that has a round door knob.  We have 2 others than can open gates, doesn't seem to matter what kind of closure.  Jasper can open a chain almost faster than we can close them.......!!! LOL
But a round door knob is a new problem and we don't have a quick answer, so tonight there are 2 feed cans up against the door inside and we will go in thru the dog pen in the morning.  We've got our fingers crossed that those cans with 40-50 pounds of feed in them will be enough to discourage him.
Posted by Tish at 10:47 PM