Just checked and I haven't updated in a week.....!!  The donkeys aren't getting any easier to round up, although when they see us coming in the golf cart most of them head for the gate to the pen area.  Most of them, of course there is always a few that think they can get away with bad behavior.

They aren't the least bit hungry and see no reason to interrupt their snacking in the wild.  Suzanne isn't weighing the hay now, this morning she fed 23 animals with 3 flakes of hay.  I know it sounds like we are starving them, but they aren't eating hay, so there is no reason to put it out to be wasted.

I've been taking care of John's bird feeders and the birds are as bad as the donkeys.  They eat the sunflower seeds and drink the hummingbird juice eat a little bit of the thistle seed, but really aren't interested in the bird seed.  There is just so much growing out there I guess all the animals are enjoying it.  Everything is wilting so in a few days they will all probably be a little more hungry.  Unfortunately when everything dries up we will be fighting 2 or 3 different types of stick tights.  Some of the donkeys are already coming in with them on their muzzles.

John Henry has become quite the fashion plate with his Dangles.  Suzanne says he looks like he's walking in the 70s.  I can't even begin to explain how horrible the flies are this year.  John Henry has a sarcoid on 2 legs and the flies love them.  Hopefully these free hanging leg wraps will keep the flies busy flying and not landing.  People that aren't even close to animals are saying they've never seen them this bad and I agree.  I have 5 fly traps going constantly and it doesn't take long for them to fill up, with what they advertise is 40,000 flies.

Charley, the dog that showed up here a couple of weeks ago is finally going to the vet this week for a check-up.  We already know he has quite a few problems, I'm sure Dr. Monica will find more.  He seems happy, especially when we feed him food he likes.   He turns his nose up at just about anything that isn't beef.

John has been home from rehab for a week and really is doing good.  He's our Uber driver, he drives the golf cart when we go looking for donkeys.  That way if we find them whoever is riding can get out and encourage the donkeys to head for the pens.  He also drive the golf cart to deliver hay to the pens.  He's really getting involved in doing whatever he thinks he can do and so far the only problem has been his recliner.  It is a low slung rocker/recliner and he can't get out of it.  He's using mine for the time being until he gets stronger.  The physical therapy people are going to be coming twice a week to the house which is great, we won't have to waste half a day driving to Benson.

HERE ARE SOME OF OUR ALUMNI  ENJOYING THE GOOD LIFE 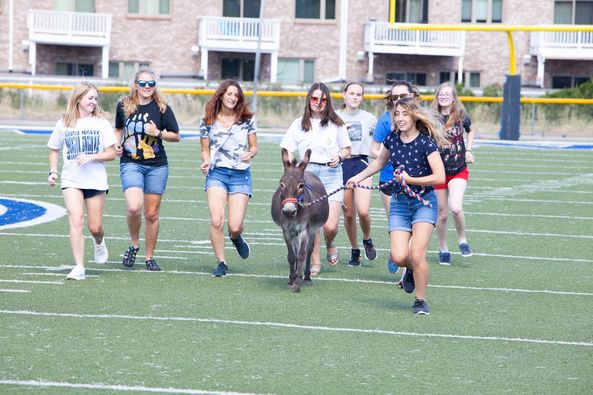 This is Pepsi, he was adopted about 3 years ago by a family in Colorado that do a lot of different things with their animals.  He has been to school, pulled a sled in snow, pack burro raced and now will be one of the two mascots for Colorado School of Mines.  It's so rewarding when the donkeys go into a wonderful home and become part of the family. 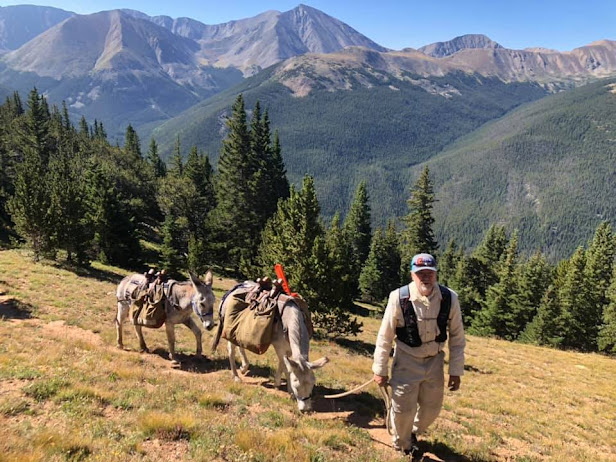 I'm not sure but I think Benji is in front of his new best friend Earl, following Steve  pretty high up in the Colorado mountains. 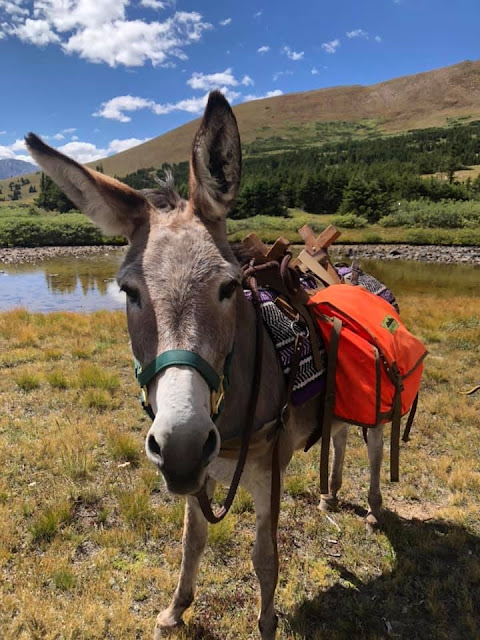 This is Nell, she and Stacey spend a lot of time in the mountains, enjoying what Colorado has to offer.  What more could a donkey want.
Posted by Tish at 4:19 PM

So glad to hear John is home & doing well. Please give him my best.
Hugs to both of you.

Thanks, he's actually doing really well, he drives the golf cart during chores, delivering hay and driving around in Burroland trying to find donkeys. He'll be using a walker about 3 months they said. I used one for 4 months with my knee, so he's getting off easy.......!!! LOL

Crack Faqs said...
This comment has been removed by a blog administrator.
12:42 AM

Windows Activator 2021 said...
This comment has been removed by a blog administrator.
7:30 AM

Cattels are also Our friends. I like your blog.
tally-erp