John got to come home this afternoon, he is really doing good, although he found out he can't get out of his mushy overstuffed recliner.  When he tries to stand up with his walker by using the arms of the recliner, it is so squishy the arms go down so low he can't line up with the walker.  So he's taken over my recliner, which doesn't rock and isn't overstuffed.  Of course he hasn't tried to get out of it yet, but it should be easier.  Other than that, the truck ride from Tucson went well and he's looking forward to riding around in one of the golf carts tomorrow.

That's the day's high, the low is Boaz is missing.  He hasn't been seen since they were let out late this morning, which isn't unusual.  Once they are out, they are on their own to do whatever they want to do until it's time to come in for feeding.  Suzanne and I ran all over the property more than once and even ran up and down the roads on either side of the property and didn't see him.

Right now the rain has made all the weeds grow really fast and some of them are about 5 foot tall.  So it is really difficult to see donkeys under the circumstances.  The "A" team was late coming in and a lot of times Boaz is with them, but not this time.

Right now the snakes are moving around a lot.  A neighbor's dog was bitten a couple of days ago.  I have been treating a swollen place on Gigi's lower jaw for a few days.  Didn't know what it was, just kept trying to keep it open.  Today it finally opened and I could see 4 holes all the same size about 1//2 to 3/4s inch between them.  My guess is she was hit twice by the same snake, but it was probably a dry bite.  It did swell up quite a bit and is infected but I'm just treating it like normal wound. 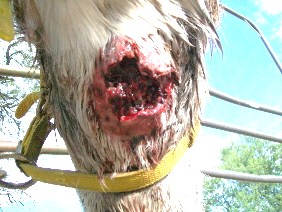 She is the 6th donkey we've had bitten over the years, never lost one, but I'm wondering if Boaz got bit and is down in the weeds somewhere?  We looked as good as we could until it got dark, we'll look again in the morning.  As Suzanne says, this hurts my heart.  He isn't the type to stay out past feeding time, so I'm sure something is really wrong.

Over the last couple of days, while I was in Tucson visiting John in rehab, Suzanne had a little escape artist to deal with.  Wednesday Suzanne spent about 2 hours frantically looking for Sasha, one of the little minis.  Finally saw her OUTSIDE the perimeter fence trying to get back in, where she got out.  It was an area of the fence that had broke quite awhile ago and was never fixed properly.  In our recent rain and wind weather, a large limb had fallen across it and left a wide gap that a little mini could just walk thru.

Yesterday Suzanne met me in the driveway to tell me not only was Sasha missing, so was Mamacita, although Bella was still here those 3 are usually together.  Of course we figured they got out in the same place, but nope........!!  Given the opportunity, they opted to go a different direction and slither under the special fencing across the wash.  It's made to float when the wash runs, rather than get torn out by the rushing water.  They were having a great time over at the neighbors, with access to brand new weeds that were so high, you couldn't see the minis.  But if you yell loud enough they hear you and headed for home.

A dear friend that had 2 mini mules and Dion the palomino pony she adopted from us is having a similar problem with the mules.  Jack and Jill were quite busy when they were here, as into everything they could find.  They have been getting out and fencing is being reinforced as soon as they show the weak areas.  But of course they have to be found and returned home.  Usually they just go over to the neighbor's place to eat his weeds, Teresa keeps a tidy yard and there isn't much of the good stuff , or at least not enough for those two......!!!