You know you can get too much of a good thing.  We've had over 10 inches of rain, 3rd wettest monsoon for Tucson since they started keeping score.

Some of the main roads in Cochise County are having huge fissures open up and people are having to find "drive arounds" to go to town or in some cases to get home.  A friend is having to drive twice as far to get home as he usually does.

In the case of our road there is no drive around, we have one road in, and there are 9 washes to cross just to our turn off, 7 of which dump into the big wash that crosses our property.

I've been driving into Tucson everyday to see John and it's been "interesting", especially since I'm driving his little sports car, instead of the pickup, much easier to park. 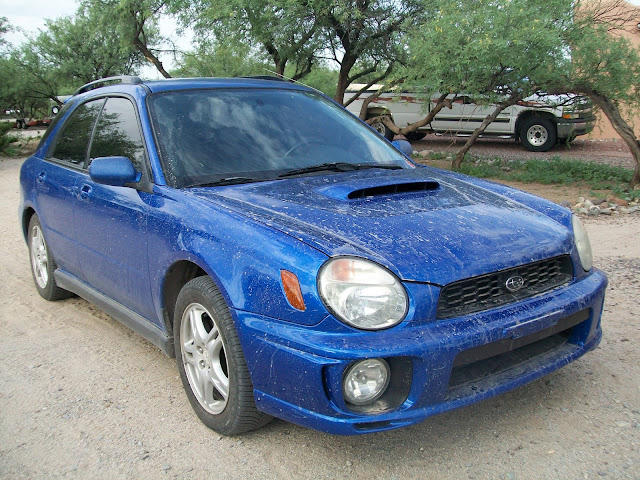 This is what it looks like after driving thru our road a couple of nights ago, that was flooded for almost 1/4 mile.  I was gritting my teeth before I got thru it, I was doing just fine, until a couple of cowboys in their big pickups came thru at speed going the other way.  Their wake went over the top of the car and I was lucky it didn't get drowned out.

This morning it finally wasn't flooded, but tonight when I came home it had rained and caused the washes to run earlier today.  There was debris was all over the road, rocks, limbs, deep mud  really a mess.  Little "bug eye" plowed thru just fine.  The license plate reads Bug 3Y3 because Bug Eye was already taken.  It is a 2002 Subaru WRX and that year is nicknamed bug eye because of the headlights, that's the only year they looked like that.

I'm going to have to get it washed before John sees it......!! LOL  OBTW John is doing really well with his rehab.  He is suppose to be released to come home on the 21st, unless he doesn't keep up with PT and OT.  So far he's not allowed to get out of bed by himself, but he's doing everything they ask of him. 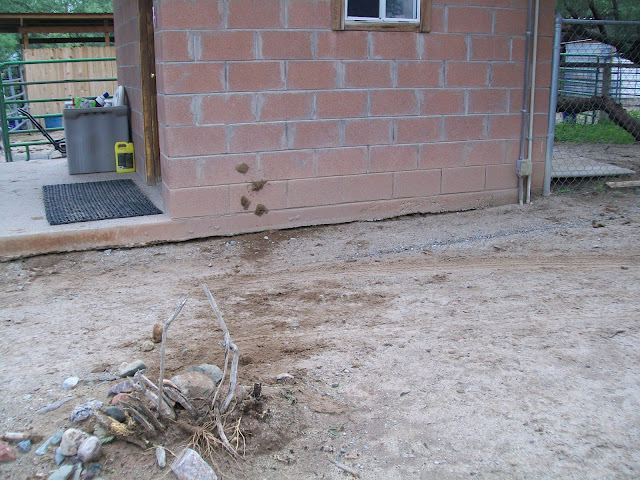 This morning when Suzanne went to throw water on the Cholla that grows beside the feed room, she noticed that it was no longer there.   Earlier I had noticed the blobs of dirt on the feed room and thought that was weird, but didn't even notice the missing cactus.

Whichever donkeys are responsible didn't even leave a spine, they ate everything including most of the roots.  But it does explain the the dirt clods on the wall, that's where they kicked up dirt digging up the tasty roots.  Earlier this summer they decimated a large bed of prickly pear.  At different times of the year they go thru a period of eating certain plants, guess it was the cholla's turn. 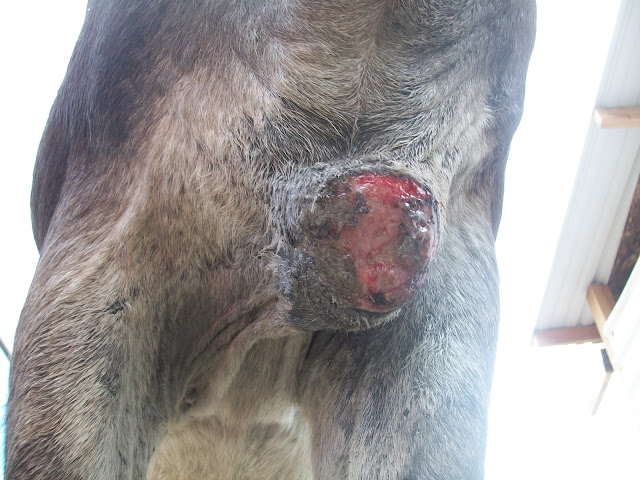 Boaz's whatever it is on his chest is looking better, the swelling is down because of antibiotics and I think it would heal a lot quicker if he couldn't bite it.  I'm sure it itches or burns or something, because he makes hamburger out of it just about the time it starts to look like it's healing. 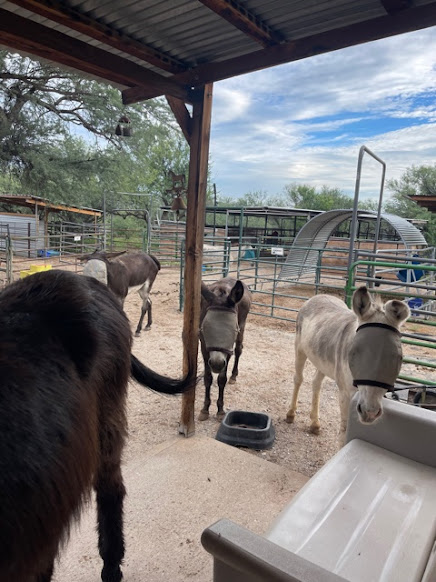 This is how it looks in the morning when Suzanne goes out.  The donkeys are having to stay on the 10 acres, because they don't seem to be interested in coming in to eat.  There is obviously too much green stuff out there.  Guess the pickings are getting a little slim because the last few mornings a lot of them are much more cooperative about showing up for mealtime.

We were suppose to take donkeys to Echoing Hope Ranch in Hereford, south of Sierra Vista this week-end.  Suzanne had everything packed and ready to go but it was postponed because of the weather.  Probably just as well, it was cloudy and rainy all day Saturday everywhere and donkeys aren't real big fans of inclimate weather.  They will enjoy typical sunny less humid weather much more.