We are all enjoying the cooler weather and even got a little bit of rain today.  Spring is my favorite time of year, but fall is a close second.  I'm sure the donkeys are enjoying the cooler weather, although they are still having to wear fly masks.  Suzanne has been taking them off at night, even though some of the flies get up before we go out for chores.  But not many, and the donkeys appreciate not having the masks on at night.  They are ready to have them back on, even Casper and Tula.  They are usually evasive if you try to do something to them.  But they will stand real still if they see a fly mask in your hands.

Yesterday about half the herd got pedicures.  Suzanne will be taking most of them up to Superior for a race on Oct 23 put on by the BRAY club and the town of Superior. Last we heard they had 67 teams signed up, so it should be a lot of fun.

Justice isn't going but he was on the list.  When Justice came here a few months ago, it had been awhile since he had been trimmed.  He favored one of his back legs and rested it most of the time when he was standing.  The first time Dan came out, Justice was pretty sure he didn't want his feet done.  Dan is a pretty laid back guy, but was also pretty sure, Justice was going to get his feet done.  The battle was all over the pen and he finally threw himself on the ground, which actually made it easier for Dan to work on him and put him at a disadvantage for continuing the fight.

The next time Dan came, I gave Justice Dormosedan but he was in a fighting mood and pretty much shook it off.  Dan said next time to not drug Justice, he had an idea. 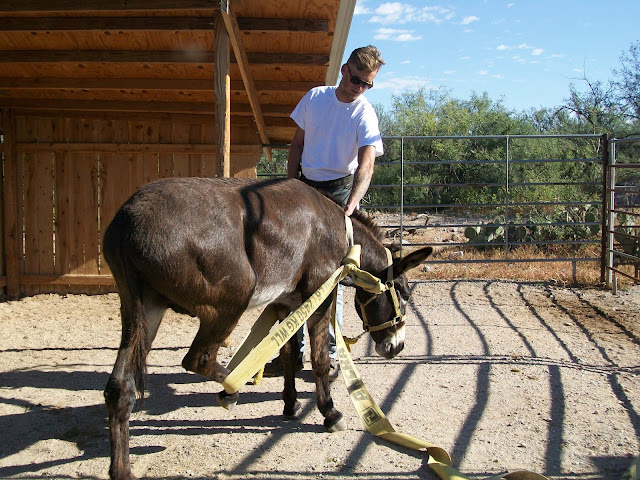 Donkeys usually react very well to a Scotch hobble, compared to his last 2 trims there was a vast improvement in his behavior.  Donkeys seem to realize when the game is over and they lost the battle.  He might not even need to be hobbled next time, if he sees Dan carrying it......!!!  LOL

Since he's been here running around all over the place, and play fighting with Cochise, he isn't favoring his foot as much as he was and doesn't rest it much either.  We had him x-rayed and he has at least 2 bone chips in that foot. I had a woman interested in adopting him when he came in as a companion for her young gelding.  It sounded like a perfect home for Justice, but I didn't want to send him  out if he might need vet care in the future for that foot.  It looks like moving and exercising is the answer hopefully for the long term.

For everyone that has sent pumpkin for Cisco, we can't thank you enough we have a nice little stash that hopefully will help see him thru the crisis.  I was in Walmart today and they didn't have the Great Value which we try to get if we can.  Some people sent organic pumpkin and brand names.  There is a difference, the color is brighter and the smell is stronger, Cisco doesn't seem to be picky, he eats it all.....!!    Suzanne said she heard another story about the shortage, yesterday.  If they keep talking about it, it will be like the great toilet paper hoarding situation last year, people that don't even like pumpkin will be buying it.......!! LOL

Here is Cisco enjoying his morning ration of pumpkin.