Suzanne gave John and I a play by play account of the week-end and it sounds like everyone had a great time, thanks to Carolyn Lee and her family.  The 2nd annual Sandam Burro Jam was held on their property, camping, music lots going on.  Wish John I could have watched all the fun, but since neither of us were going to be running anywhere, and the stay at homes would want to be fed as usual, we were more valuable at home.

Big Gus has developed cellulitis in his hind legs, in 24 hours there is a lot of drainage which of course gets mixed in with all the dirt he walks thru and he ends up with a really icky looking foot. 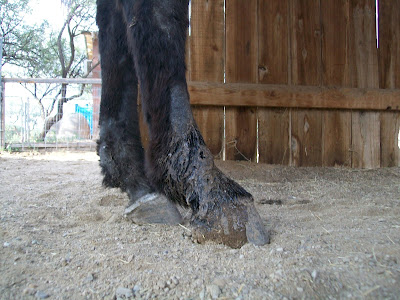 I've really been amazed at how cooperative he has been.  Of course he loves attention especially if none of the others are around.  He doesn't like to share with the other donkeys.  Dr Jeremy drew blood today to see if there is something else we need to do except keep it as clean as possible 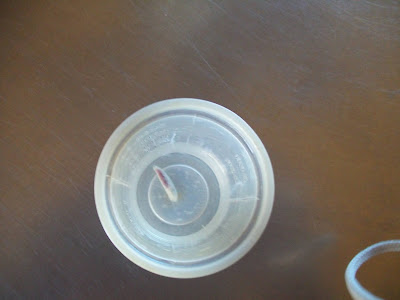 Yesterday when I was washing his leg, I was rubbing in the soap, and all of a sudden this little guy, who is now pickled in alcohol and a few dozen of his friends came wiggling out of the hair on Gus' leg.  There has to be openings in the skin where the liquid is draining from.  But there aren't any wounds or sores for them to be in I wouldn't think.  They just seemed to be in the hair and some of  the hair came out when I started making sure they didn't stay on Gus.

It is in a pill cup, a little less than 1/2 inch long and everyone that has seen it, says it has little bitty legs almost like a centipede.  They are so small I can't see them.  We've talked about seeing if the UofA might be able to tell us what it is, so far no one has even tried to guess what it is.

We're still getting in pumpkin for Cisco.  Almost all the boxes have come in without any information on who the order came from.  We've been able to personally thank a few of the people for their generosity, but for the most part, we've gotten boxes of pumpkin and no name to go with them.

Today we got a box with a name on it.  I would have known when I opened the box that it was from Debi in Ohio.  She sent a box of pumpkin last year when there was suppose to be a shortage with all sorts of goodies for everyone on the property, people, dogs, cats, and of course pumpkin for Cisco.  Not only were there goodies for everyone again, she wraps each can of pumpkin, last year I think it was Christmas paper, this year pretty orange and green tissue paper.  Thank you Debi, what a fun surprise and Cisco will really enjoy the pumpkin. 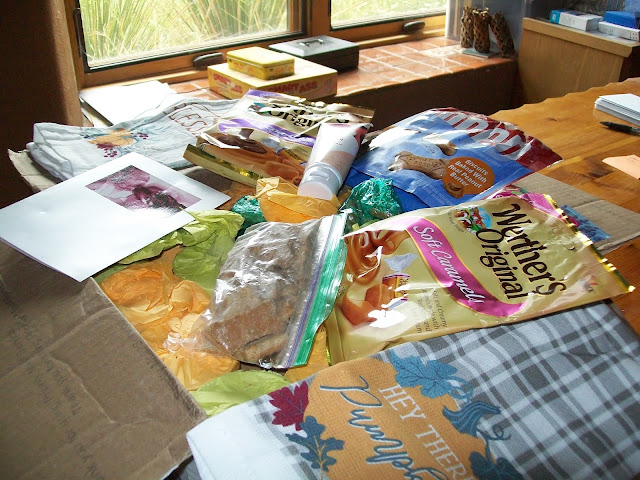