John is really doing good with his therapy and recuperation from his broken hip.  He even did a tour today, he said he wanted to try it, and he did just fine.  Of course we only have half the donkeys we usually have.  Suzanne left yesterday to go to a fun race north of Phoenix today and took all the donkeys that are healthy and like to run.  Haven't heard yet how it went I'm sure everyone had fun.

John and I are holding down the home fort, so far it's went really well, we haven't had any problems.  This morning Susan a new volunteer came for morning chores.  She's been here a few times and really is a lot of help, she even weighed hay this morning.  John said she has a good feel for when the bucket has about the right weight of hay in it.  She's coming back in the morning, so we're really having a pretty easy week-end even though Suzanne is gone. 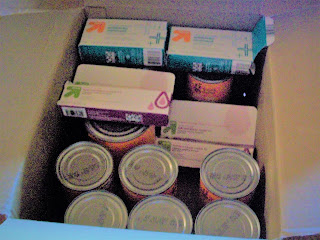 Last year just about this time the word started spreading that there was going to be a canned pumpkin shortage.  Cisco gets a can of pumpkin daily to help his elimination system run smoothly, so we started buying all the pumpkin we could find and pretty quickly ran all the local stores out of pumpkin.  Thanks goodness by January the problem had pretty much fixed itself and pumpkin was available. 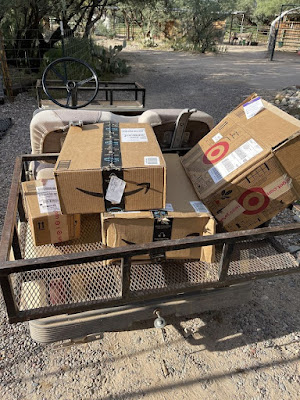 Here we go again, same thing this year.  It didn't take but a week or so for us to grab all the available cans in the area.  I put a message on facebook and people have been sending pumpkin from all over the country for this old guy it's amazing.  I'm sure the FedEx and UPS drivers would like to know what's going on.......!!!  LOL   Cisco dearly loves his pumpkin and we're not sure he would even eat his mush if it wasn't top dressed with pumpkin.  We usually get a dirty look if we're too slow getting the pumpkin "plopped" on top.

Jasper is one of our "expert" gate openers, he's really good at it and can open gates quicker than we can stop him.  He's usually discreet and if we catch him he tries to look innocent and finds something else to do.  Suzanne caught him the other day and he was so focused on getting it open, he didn't even notice her, silly boy.  He did get it opened......!!!

This is what happens if we leave the courtyard gate open.  It doesn't take long for some nosy donkey to come in to see what we're doing. 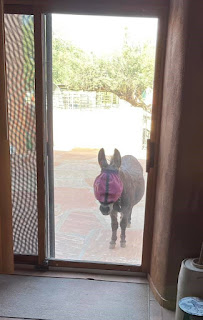 So glad John is doing so well!
Love the videos!

Yes it is good to hear John is doing so well. Suzanne looks like she will have a busy week. Brave girl! I watched the mule festival in Calif. last week. It just proved mules are smart and have a mind of there own.

We have ordered John an all terrain walker, which should be fun. Hopefully he will behave himself and not get to frisky. He should have about another 5 weeks with a walker.

Yes, Ellie mules are very smart, was that Bishop Mule Days you watched? We keep saying we're going to go see it, but we've never made it yet.

I don't remember where it was held. It was ver interesring. The people with packing mules took everything of them and than the whole herd was run to the end of the arena and mixed up. The owners had to takw ropes and find thwie mules and being them back to the other end and put all the packing stuff on them and stand before the speakers stand. It was fun, some mules wanted to find thwwie owners, others wanted to play catch me and all had a good time. I get channel RFD TV and find a lot of good shows like that. Animal and vet shows always carch me attention.