But the weather people now say it won't happen until tomorrow night.  It was 38 degrees this morning, so we all bundled up for chores.  Of course by the time everyone was fed we'd shed the coats and were enjoying the sun.  The desert is a strange place for weather.  It's nothing for us to have 50 degree swings in a 24 hour day, which means you dress in layers.  Right now we are having pretty strong wind and they say it will be windy all night, and  tomorrow night is suppose to be below freezing.  Time to drag out the sweat pants I guess.

Yesterday we took 5 of the minis to Echo Hope Ranch down by Hereford. What a beautiful place  close to the San Pedro Riparian Area, lots of huge cottonwood trees and they even have a pond with catfish in it.    Lots of people coming and going all day long, and the donkeys were a big hit.  The 4 boys, Jackson, LaRoy, Siggy and Harley are old hands at entertaining people and getting lots of petting.  Sasha was the only girl.  She was found on a property where the people had left her to  take care of herself.  She's warmed up quite a bit with so many people coming by.  But she still looks at people like, "what are you going to do to me"?  She finally got into standing by the corral panels close enough so people could pet her especially the kids.  Being out like that is really good for her confidence, so we'll take her out as much as we can.

John not only went with us, but he helped when he could.  He doesn't get around the donkeys much, they could knock him down without meaning to, but there's other things he can do.  We got him a super duper walker last week.  He  says it's like a Cadillac compared to my old one he's been using, it has a seat and a compartment to put stuff in.  We must have saw at least 6 or 7 walkers like his, so of course everyone was comparing walkers like people compare cars.....!! 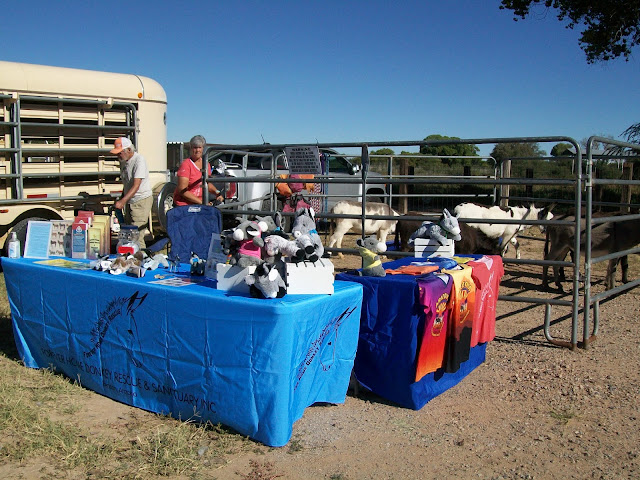 This morning the 5th wheel went to a new home. We had planned on remodeling it into an office for Suzanne and a bedroom, where people could stay for a couple of days with the donkeys.  But it had too many issues and we decided to go in a different direction.

It found a home, it will be remodeled and will be put to good use.  Now we're headed to Plan B.........!!  We're looking for a construction office, that we could divide into 2 areas and also maybe have an area for our stuffed donkeys and t-shirts we take to event to sell.  Right now all that stuff is in one of our bathroom.  It would be nice to have it on display, so people could browse if they want to. 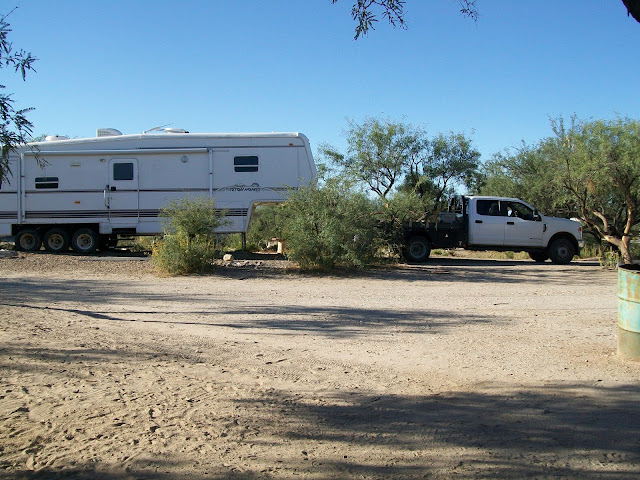 We've been really really busy recently, but we plan on taking Charley, the blind/ deaf dog that found his way to our place, to an eye specialists as soon as we can, to see if there is any way to help his sight.  We think he might be able to see shapes or shadows in bright light, but not much.  He's learned his pen which is about 30x70 and he has a doggy door that goes into the feed room, which he learned the 1st day he was here.  The feed room has A/C and heat, although he likes to spend most of his time outside.  We think he was a ranch dog, although he is house broken.  When the farrier was here trimming the donkeys, he got all excited.  Dogs go crazy over the hoof pieces the farrier trims off, Charley acts like he knows all about hoof trimming.

He has some treats that look like a rib bone with meat on it, I'm sure it's probably all grain of some kind, but it looks real.  Every time we give him one, he gets all excited, takes the bone, goes outside and buries it immediately.  We have no idea how many he's buried, and can't figure out if he's saving them for later, or getting rid of them.

Charlie is getting ready for a rainy day it seems. I think he has gone hungry early on and just wants to save food for the next time he does not have some. Thanks for making his life so much better. You all have a heart of gold and maybe a near enpty wallet.

If Charley has ever been hungry it hasn't been lately. He's pretty chunky for his size and is a picky eater too. I can't imagine someone dumping a blind/deaf older dog. He acts like he's been taken care of, we put up ads in the neighborhood, but no one called on him. He is chipped, but the chip was probably put in by the breeder. Some breeders that care where their puppies go, chip them and put their info in, so the puppy can always have a soft place to land.

I thought he came to you from a bad life before, When we lived on the farm there were a lot of morning there would be a new dog or cat sleeping in the hay. People seem to think farmers can take in all that are dumped in front of the barn.