SUPERIOR IS A "WRAP"

Yesterday morning John and I got up at 2:30am to feed donkeys, so we could leave by 4am to get to Superior hopefully before the races started.  Our neighbor let them out later in the morning and we made it with about 15 minutes to spare. 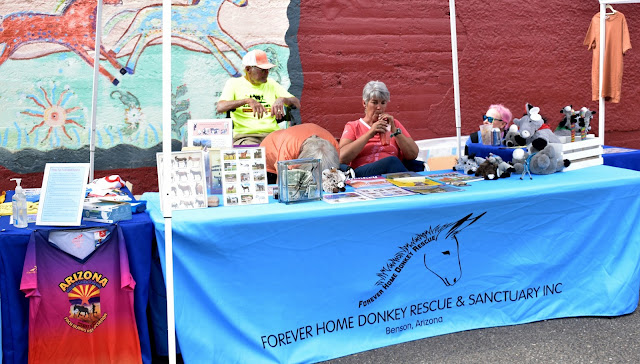 Suzanne had the table all set up, all we had to do was show up and sit down.

I didn't really get to see the start of the race, I stayed with the table.  Later I did get to see Lynn and Muzzy come in first place for the 12 mile race which was pretty exciting. 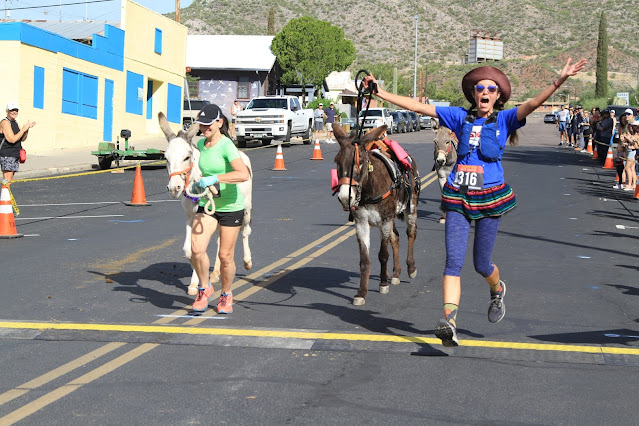 This is a young lady named Jennifer, winning the 6 mile race with her team mate Koshare.  Suzanne had taken him with her to Superior.  She had planned on helping to clean the trails after the race and taking him with her to load trash or whatever in his saddlebags.  Suzanne had paired Jennifer with Ruthie, as Jennifer was a 1st time burro runner.  Found out she is a fast runner in people races, so the plan changed from Ruthie to Koshare.  She came in planning to win and that's exactly what she did.  In fact Koshare timed the fastest time on the trail of all the burros running.  I'm not sure how they figure the time.  He ran a 4 minute mile a few months ago in a race, his team mate was an ultrarunner and managed to keep up with Koshare.  It's not for the whole race, I just don't know how they measure it. Jennifer works in the health care industry and quite a few of her fellow workers came to cheer for her and Koshare.  I would imagine she is now hooked on pack burro racing......!!!  LOL

Animals always get sick on week-ends or holidays, at least ours always do.  Friday morning Charley the dog that showed up at our place a few weeks ago was very lethargic.  He's usually not a lethargic type of guy and our local vet is closed on Friday.  I called a vet in Willcox and they actually got him in that morning.

A lot of vets seem to have taken a lesson from people doctors.........rely on tests, not experience.  They came up with a list of what they wanted to do and I picked out x-ray and said we'd  wait on the others.  From experience an x-ray can save you a lot of money if there is cancer involved.  Showed a area that looked like he might have swallowed a bone or something.  He doesn't have access to anything and the few treats we've given him, he doesn't eat.  He runs outside and buries them.  \

So I agreed to blood test, and they sent him home with antibiotics and steroids.  He had something going on temp. 103.1.  He was pretty much back to his perky barky self by Sat. morning and has continued to act normal for him.  They are suppose to call in the morning with the test results of the blood draw.  Since he's so lively, they'll probably just tell me to continue with the meds twice a day till they are gone.  I doubt they will know what the weird area in the x-ray is.

Big Gus is finally off his twice a day antibiotics as of this morning for cellulitis.  His legs are staying dry so hopefully when he's finished with about another week of pills they will continue to be dry.

Some pictures from the races at Superior 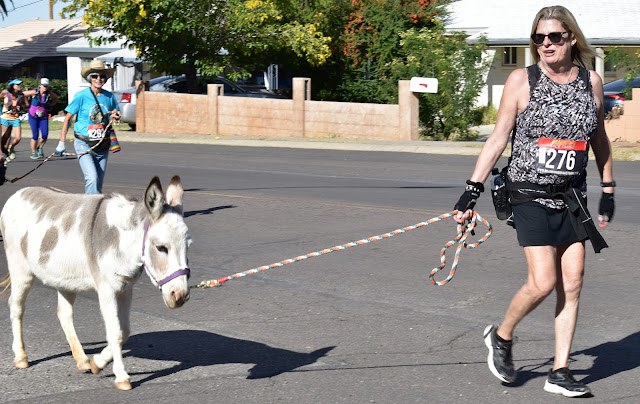 Sasha and her team mate Clare, Suzanne said Sasha kept going to the sidelines where there were kids that would pet her.  Unusual behavior for her, she was abandoned on a property over by Willcox, no one knows for how long.  She's pretty independent and usually a little standoffish.  I guess she's decided kids aren't a threat. 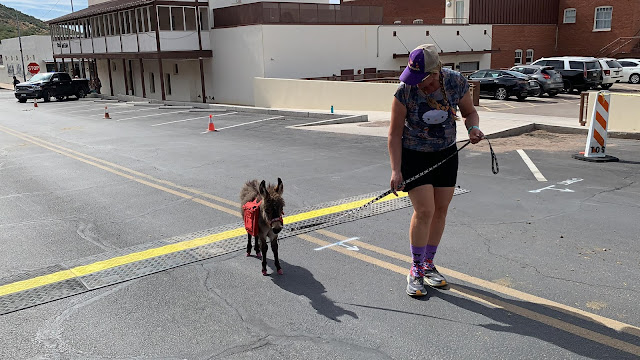 This is Button a 3 month old orphan that Michele at Lucky A Ranch is raising.  The mother wouldn't have anything to do with him, and the owners were going to shoot him.  Thank goodness someone got in touch with Michele.  She and her daughters spent Friday night at Superior in the hotel.  They sneaked Button in, put an adult incontinence diaper on him and no one knew.  This is Kristen showing him where the finish line is and teaching him how to be a pack burro racer. 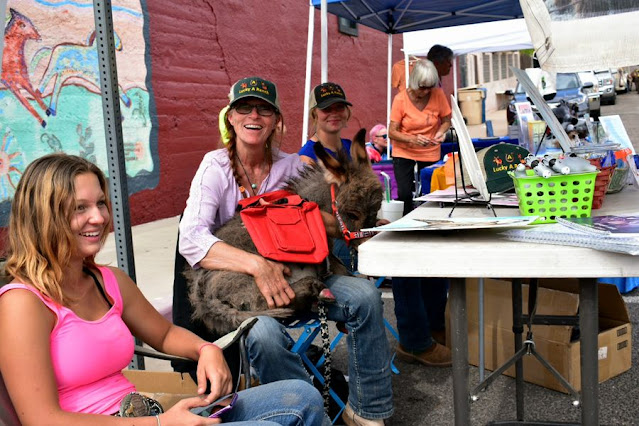 This is Michele and her daughters.  If you look closely you will see a brown blob on Michele's lap.  Button has his own red saddle bags. 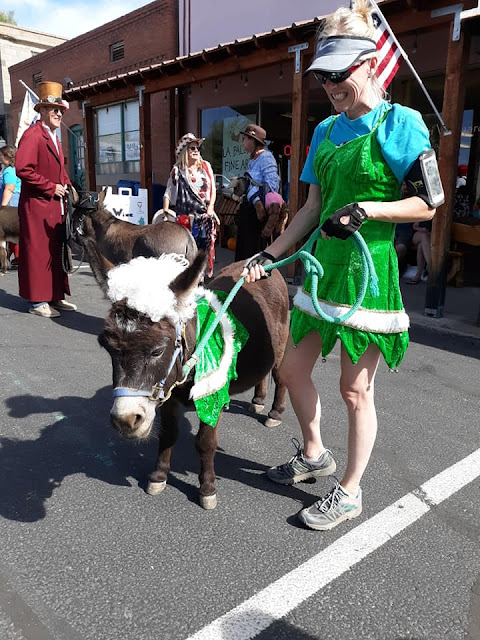 Siggy and his handler took 3rd place in the costume contest.  He was a green elf. 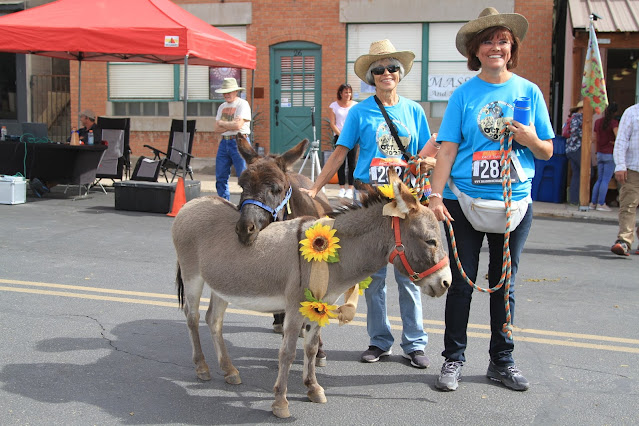 Jackson and LaRoy are completely bonded, Maryann and Teresa knew they had to stay together, looks like LaRoy took advantage of a rest break to use Jackson for a pillow.
Posted by Tish at 6:44 PM

Looks like fun for fit people and donkeys. I like your job, just getting to talk to people and watch. Suzanne is a good person and hard worker it seems.

Yes we couldn't do it without her.