Lynn and Linda and the 19 donkeys made it back from Black Canyon after a wet cool week-end.  Donkeys aren't real great fans of wet, they don't want it on their feet, or their bodies, so I was surprised that they went along with the crazy people wanting to run 3, 6 or 9 miles in questionable weather.  There were around 70 teams running which is amazing for a 1st time race, a lot of the human runners had never ran burros before, which adds a certain amount of excitement to the race. 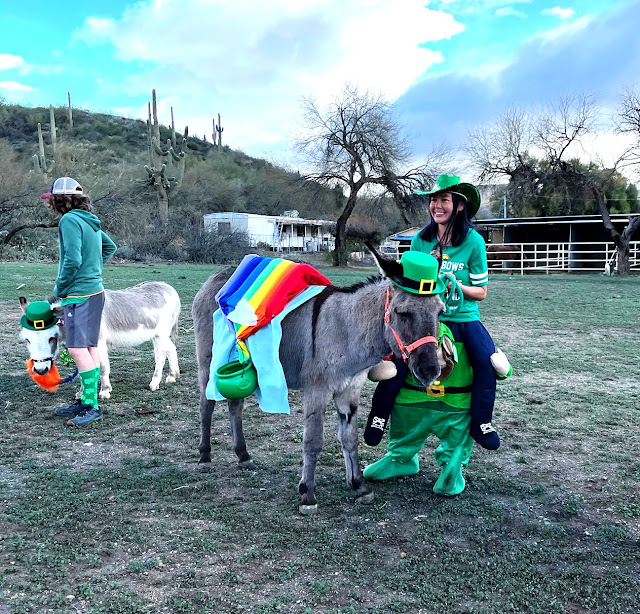 Before the race, they had a costume judging.  Loki and Linda won....!!  I wish you could see Linda's costume it's really cute.  It's pants with a leprechaun head, that looks like the leprechaun is carrying a person on his shoulders.  That's suppose to be Linda's legs hanging on both sides of his head. 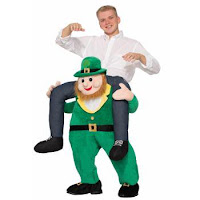 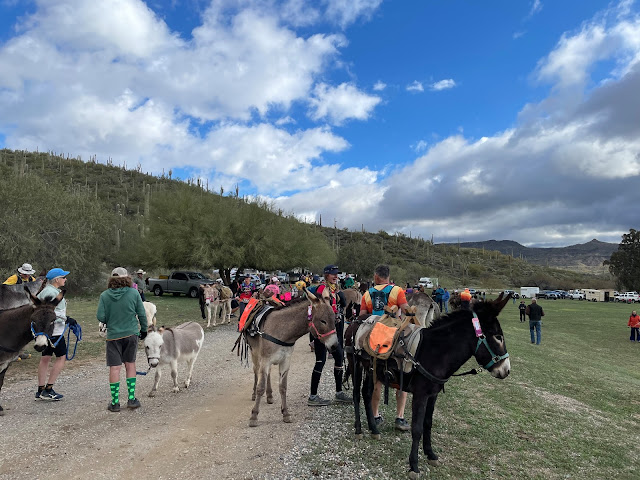 Everyone anxiously waiting for the start of the race

The races usually start with a gunshot.  Linda said if they had used a gun shot they would have probably had loose donkeys everywhere.  So they had a count from 10 down start. As it was there were quite a few freedom loving donkeys at the start, with people trying to catch them.  Once the donkeys that know what racing is about get going, the others usually stay with the herd, so they all settle down.  Well most of them do, Lynn said he caught the same donkey 2 or 3 times....!!! LOL  If a runner catches a loose donkey they hopefully can find something to tie them to, so the donkey's runner can find them.  Linda said she was involved in tying one to a very large heavy log, which the donkey preceded to drag around.

THE START OF THE RACE YOU'LL NOTICE A FREE SPIRIT DONKEY ABOUT 36 SECONDS IN DOING IT'S OWN THING, I'M SURE THERE IS A HUMAN SOMEWHERE TRYING TO CATCH UP...!  Probably that woman running by herself not far behind....!! LOL 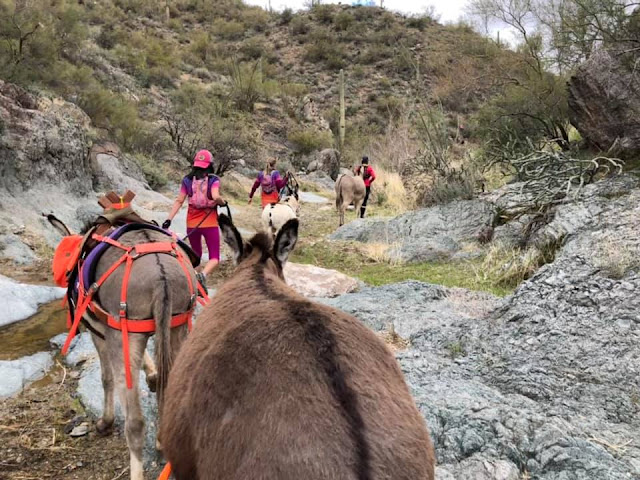 That's Linda and Misty River, in the orange.  They finished 6th in the 9 mile race.  Lynn and Muzzy finished 3rd and Koshare and his runner finished 2nd, 5 seconds out of 1st.  Got beat by a "girl donkey" named Marshmallow....!!
THE BROWN DONKEY FINISHING 2ND BEHIND MARSHMALLOW IS SUZANNE'S KOSHARE
SOME OF THE TEAMS

Of course no trip to Black Canyon north of Phoenix on I-17 would be complete without stop at The Rock Cafe.  They are known worldwide for their pies, Lynn and Linda brought a cherry pie home with them.  Unfortunately it's all gone now....!! 😞

All of our donkeys finished and their running partners all were excited and enjoyed the experience.  The 17th of April they'll do it again, in a different venue..... Tombstone.  This will be the 2nd year to have a race in the "town to tough to die" and everyone is really excited and looking forward to it.  If you are in the area, come on out and if you've never seen a burro race, it will be a great opportunity to see what all the fuss is about.