Of course the first thing I did this morning was run out & see what the baby was doing.  He was out exploring, & running around until I turned on the camera.  It's almost like he knew I wanted to show him off.  Right before this he was leaping & trying to buck.  Maybe he wore himself out.
I was suppose to go with John & Vic today to pick up Eeyore the mule, but decided I better stay home.  I hate to miss a trip, but I'd worry all day.  This way I can go out "often" & see what the little guy is doing.
We had a lightening, thunder storm with a 5 minute deluge of rain right at feeding time last night.  John went out to see how he was doing.  Mocha & Thelma & he were all laying down under cover.  As soon as the rain quit, he was out & about.  There was a puddle in their dusting spot, & I was surprised that he thought it was fun to stand in & that Mocha would let him do it.  The donkeys usually hate to get their feet wet, but she didn't seem worried about him.  He went back 2 or 3 times to try it again.
Not wanting to get their feet wet doesn't seem to mean the same thing as getting the body wet & muddy.  Most of the others came in, dripping mud from rolling after the rain.  This seems to be a very important part of donkey behavior, & mule also, Rusty is usually the dirtiest.  Of course he's white, so he looks worse than the others. 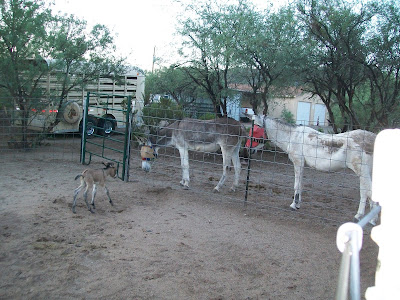 Frijolita & Quilla saying hello.  Quilla has spent a lot of time hanging around the pen trying to get a good look at the little fellow.
Posted by Tish at 6:47 AM

Congratulations! Thanks for the video and first photos.
There's nothing cuter than a baby donkey.

OMG...!
How absolutely adorable!
Thank you so much for the video & pics.
Have to come out & visit soon.