We had a lot of fun, drove 1,231 miles just to watch a night of dirt track racing.  But all along the way there was things to see.  I can get more fun out of gawking out of a car window than probably anyone else on the planet.

I spent a lot of time on the road as a kid, traveling from Texas to Missouri and visiting the grandparents in between in Oklahoma.  That was before computers, so what does a kid do?  You look out the window to see what's out there.  Never got over the habit I guess.

I'll say one thing about California, they have a lot of wind turbines, miles and miles of them.  I'm not sure they are worth the cost not only in money, but what they do to the landscape.  When I look out the windows of the car I like to see the hills, mountains and the different rock formations, not a bunch of windmills.  Most of them weren't even rotating, so at least they weren't killing birds and bats.

Did enjoy seeing the Imperial Dune State Park, miles and miles of really nice sand dunes, made me wonder if that is where a lot of the movies like Lawrence of Arabia were shot.

We knew the race track was between 2 small towns Lakeside and Ramona, small being the important word here.  That means probably no motels, although  they were close to El Cajon, so that's where we decided to find a motel.

Talk about "culture" shock, we quickly noticed that CA must have ordinances against billboards and lots of information along the freeways.  That means if you are driving on the freeway at the speed limit looking for motel signs, and the "natives" are passing you like you are sitting still, you probably are going to have a hard time finding a motel.  I noticed a Motel 6 sign way up in the air and told John to exit.  My idea of camping is Motel 6, but what the heck it's within sight and we won't have to keep looking.

Got in the room and started laughing.  I can almost list on one hand what was in the room.  Bed, one night stand, 1 kitchen chair, TV, cabinet for TV, no refrigerator, no microwave and John already knew they didn't have coffee in the lobby in the morning.  When he checked out in the morning, the woman asked how the room was, John told her it was clean, which it was.  There wasn't anything in the way of the maids cleaning it........!!! LOL

Had all day Sat. to find the track, another motel, and get familiar with the area, so off we go.  Had instructions on finding the track, luckily Fri night we were running around and happened to see a race car headed out for practice.  Because if we had only had our instructions, we'd still be looking for the track.  We followed him about 12 miles in some of the most up and down, sharp curves on a narrow road with lots of traffic going both ways, we've seen for awhile,   Arizona is a lot more wide open.  But he led us right to the track.

Tried to find a motel and they were all full for the week-end, because of lots of sports going on in the area, one of the motel clerks told John.  So we decided to leave the area right after the races Sat night, if nothing else it should be cheaper........LOL

The races were really good.  Lots of cars in 6 classes, lots of spectators, you just can't beat Sat. night 1/4 mile dirt track racing for entertainment.  They had Sport Compacts which are about like our Hornets.

We headed out after the races and drove to El Centro about 100 miles, stayed at a Motel 6 for $52. and had a great breakfast the next morning at a Mexican restaurant that was about the only thing open in town, everybody in town that was awake were there.  Then we headed home.

You might notice no pictures, I forgot to take my camera.

Suzanne had to contend with rain at chore time, she said the wash actually ran a little bit, but not bank to bank, thank goodness.  But she said everything went good and the donkeys behaved themselves. 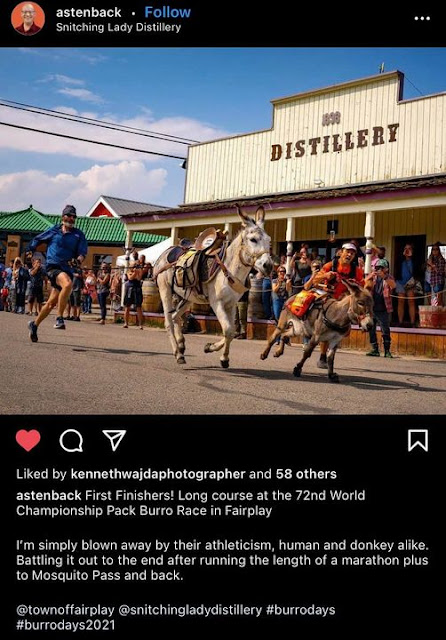 This is such a great picture of the finish of the pack burro race in Fairplay, CO this week-end.  These two teams have just ran 29 miles, some of it over 10,000 feet and look at them still racing.  Yukon and Bob Sweeney, beat little Buttercup by about 3 or 4 feet at the finish.