I realize February is short, but it sure went by in a hurry.  It was 16 degrees here this morning, so winter hasn't given up yet.  But the days are really nice.

We picked up Ruthie as planned and she is already out and about.  She is really calm and didn't need more than one day in her pen to get use to lots of eyes looking at her. 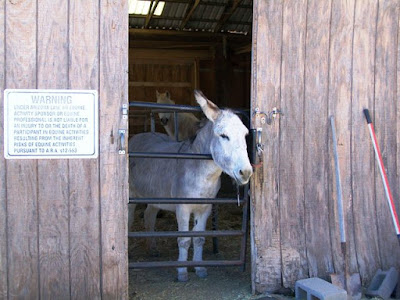 This is Ruthie standing in the real nice barn she has used for the last 6 years or so. 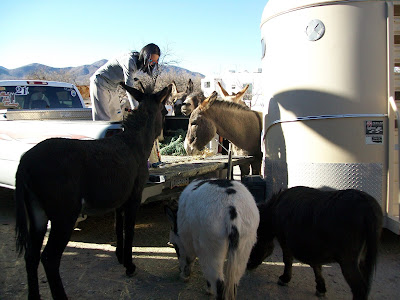 The welcoming committee.  You might notice they aren't as interested in the new girl as they are in the hay scraps that came with her in the back of the pickup.....!! LOL 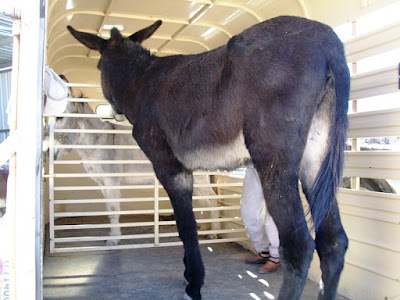 Once hay cleanup was over, Link decided to get in the trailer and visit with the new girl.  I guess he has his priorities......!! LOL 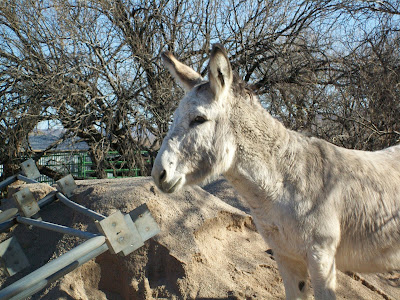 She went out of her pen the 1st morning like no big deal.

She was more interested in running the pens after we let the others out to see if there was any food left.  These guys don't leave much to find, so she just wandered around checking everything out. 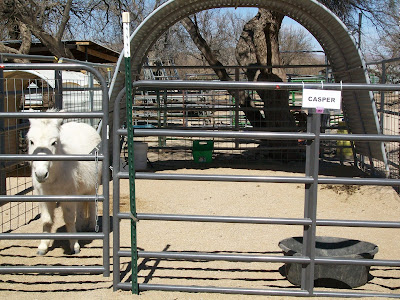 Unfortunately there is a slight problem.  Casper always takes after the newbies, doesn't matter boy or girl, he goes after them like a little buzz saw.  She's big enough she could make mince meat out of him if she wanted to.  But she chose to run, which really gets him going.  So for the time being, he's in solitary during the day and she gets to roam.  At night he gets to go out and she stays in.  He is also getting a herb that helps to control his impulsive behavior.  After a few days the problem solves itself I guess, he leaves them alone.

Gigi has been here for probably 11 or 12 years.  She is very shy and only in the last year or so has she warmed up to actually enjoy attention as long as it isn't overwhelming.

She was probably born crippled and is the only donkey here that has to wear shoes to keep her front feet from basically turning backwards which is the way they were when we brought her home.  Her friend Rosie came with her and they are inseparable.

This is the most comfortable I've ever seen her with someone.  Sierra helps with the donkeys when she can, and Linda just happened to catch them, maybe sharing secrets.

Donkeys seem to have a natural affinity for children and will let children do things with them, they wouldn't let adults do.  It's really rewarding when they decide to take a chance and come out of their shell. 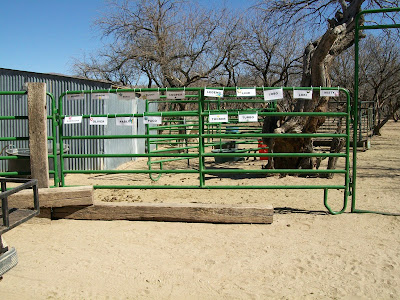 Shannon, Cindy, and Tara come to groom and play with the donkeys almost every week and have for quite sometime.  The donkeys love to be groomed, but the girls were having a problem figuring out who is who.  Shannon made name signs for everyone and this is the Burro Barrack's roster.  I'm surprised they are still up since yesterday afternoon.  Koshare took his down the 1st day.....!!!  LOL  We're not surprised, he has a long list of damages to account for.  Eating part of the roof off one of the shelters was a little much though, he's tall enough to accomplish that and did so..!! LOL   Then he tore down the electrical wires that were in the pen so we could have light if needed.

Ruthie is a pretty little girl.

She's not very little.....she's on the upward side of a large standard. She's really calm and easy to work with. Diane took good care of her for all those years.