Got home in time to feed this afternoon, which was a surprise.  We actually were only at the vet clinic a little over an hour, & that included visiting with our friend Nancy a little bit.  She retired from her job today & they had a going away lunch for her, so she didn't know if she'd make it to the clinic or not.

I think Jenny was glad to see us, she came over to the fence as soon as she saw the truck & trailer.  They had just changed her bandage yesterday, so instead of watching the vet told me the layers from inside out.  I'm much better at visual lessons, but the main thing is to keep it clean, there's no medicine to put on it, so I should be able to figure it out.  The vet said I might have to sedate her, I guess she's been acting like Jenny & giving them a hard time when they would dress her foot.  I'd like to say she won't do that with me, but I know better........!!!!  (G)  Jenny can be VERY uncooperative if she wants to be. 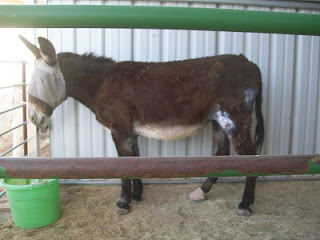 She loaded pretty good, for her & made the trip home just fine.  She was ready to get out when we got here & went right in the hay barn.  Since then she has seen all there is to see, she's been visited by most of the donkeys & is ready to go out.  She lets us know that by trying to knock the corral panels down.  SIGH!  She can't go out until I figure out just how much abuse a duct tape bandage will take.  The next bandage change is Monday, in the meantime I'll have to check it a couple of times a day to make sure she isn't wearing out the duct tape, even though the ground in the hay barn is really soft.

If you listen to the video at the end you will hear John yelling.  I asked him what happened & he said BlackJack kicked him.  BJ is usually very careful about messing up, but in all the hoopla & donkeys milling around he didn't look before he kicked, caught John on the knee.  Sure made John cranky, later BJ came up & laid his head on John's chest, guess he was trying to make up.
Posted by Tish at 9:45 PM

qifei2012 said...
This comment has been removed by a blog administrator.
2:22 AM