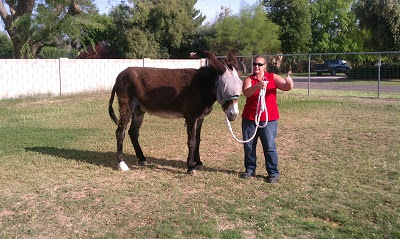 Here is a picture I was beginning to think I would never see, Jenny actually standing on her own 4 feet.

Dr. Voss called late this afternoon & said he really didn't want to put her in a sling, & listed a long list of reasons, which all sounded logical to me.

So a group of them went out with the idea that she was going to get up one way or another.  He apologized for having to use a HotShot on her, but if that's what it took I can live with it.  He said as soon as she got on her feet she tried to kick them, so I assume she didn't think much of the HotShot.

He said she was out walking around, so hopefully she'll be up in the morning & will stay up.

Courtney & Martha came out today & trimmed & massaged.  Martha worked on Gus, Pepper & Frijolita.  Gus almost fell asleep & Pepper almost fell over.  Martha has worked on Pepper before & she said this is the first time she thought he really enjoyed it.  Always before he was so thin he was just skin & bones.  Now that he has a little meat on his bones she has something to work with & I guess he appreciated it.

Courtney trimmed on 9 of them.  I'm anxious to see how Gus is doing in the morning.  He's been walking real good since he came back from Claire's, so hopefully getting trimmed won't mess him up.

Boaz got trimmed again.  His front feet had bad crevices in them, but they seem to be growing out OK from the coronet now.  Hopefully with regular trimming his feet will grow out healthy.  I'm finally making some progress on his proud flesh place.  It's getting healthy pink tissue around the edges, which eventually should make it get smaller & smaller.  I'll try to get a picture tomorrow when I change the bandage if I think of it.

I was really proud of Mocha.  She had never stood to be trimmed before without a lot of effort on the part of 2 or 3 people.   Today she stood like she knew what she was doing.  Of course stuffing animal crackers in her mouth helped.  Tucker was a good boy too, guess he saw momma stand & decided he could too.

Thanks for sharing & of course taking such good care of all of these sweeties.

We'll really be glad to get her home, that's for sure.

Hoo-ray for Jenny!
So happy for all of you.
Kiss my boys for me.

Gus did great after his trim, didn't seem to make him sore at all.

Yes we'll be glad to get Jenny home, just hope I can keep her foot clean. You know this isn't the most "sterile" place on earth......!!

The result of two years of R&D conducted by a team of the most qualified experts in fitness,P90X includes training so cutting edge, so outrageously effective, you'll be blown away by your visible results and your performance. While wholesale P90X workout is based on Muscle ConfusionTM-to break normal 30-day training plateaus so you get results fast-P90X2 ups the ante with a training technique developed by professional sports trainers for world class results: P.A.P., or Post-Activation Potentiation.