Vet clinic called this morning, said Jenny's still getting stronger, that it only takes one person to help her get her rear end up under her now.  So she's still not "on her own" yet...........SIGH.....!!!  But we'll take what we can get.  She said they go out & get her up during the day a few times.  So we probably aren't going to be going up to get her until later in the week.

I finally got a picture of Boaz's leg this morning.  It's much better than it was, but I don't see it getting completely well without the vet scraping it down some more.  It's just too thick. 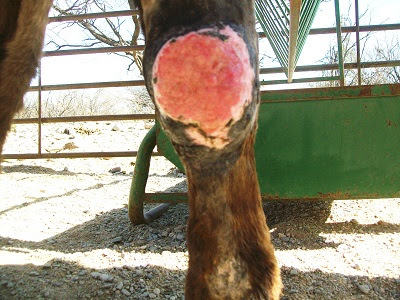 Racing went pretty good last night.  Finished 2nd in the heat race & 7th in the main event.  Brought the car home in one piece, so that makes John happy.......!!! LOL

Also brought home a rather oversized end of the year trophy for last year.  I finished in 6th place in the Hornet class & this trophy is about 4 foot tall......!!!   Absolutely the biggest most useless piece of "memorabilia" I've ever had the pleasure of possessing.  Have no idea what the 1st place one looks like, but I bet it was BIG.......!!! 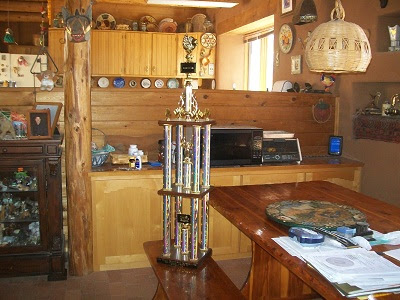 There was a big mess at the end of the year, the promoter got locked out of the track, & it's all new people now.  I guess he left the trophies & the new people just got around to handing them out.  Too bad they didn't have access to the end of the year point fund money, he absconded with.

Any ideas on what to use it for?

I have treated granulomas just like that several times with 1% silver nitrate. A few applications and within a week it will be GONE with healthy tissue replacing it. It was used for many, many years to treat non-healing wounds in diabetics and is still used as eye drops in newborns. The drug patents ran out and there is no longer any profit in selling it so it was pulled from the market. This is why your vet probably doesn't know about it. Tell him to research it before scraping that again.

You can still get silver nitrate in photo supply stores, but you will have to dilute it down to 1% with distilled water. you will only need an ounce or two. Wear gloves and be aware that it will permanently stain anything it touches even though it looks like water, but I swear if you try it, that thing will be gone forever. Feel free to contact me or have your vet contact me if you would like more info.

Hi Tish and John.... Thought maybe you should use your trophy for hanging hand-washables... if you have any LOL! It is quite the THING! I just read the previous post about the silver nitrate, which made me think about collodial silver, which is perfectly safe and may do the same thing. You can do some research on the internet. My sister uses it, and so do some folks here in Alamos. It is a natural antibiotic which has been used for centuries. Joanne bought a little machine to make it, which I have here with me in Mexico.
Hope you two are doing well. Things good here in Alamos, as always. Janet

I'd much rather get rid of it slow & easy, than to keep taking him to the vet to get cut on. I didn't take a side shot but it's very thick, probably sticks out 1/2 inch or more from his knee.

Thanks for the ideas, I'll check into silver nitrate, maybe I can find some.

I've used collodial silver before, but don't have any left.
My trimmer usually has some.

Yes, proud flesh and granuloma are the same thing. I am not sure that collodial silver will work. It might help, but I doubt it will cure it the way silver nitrate would. If you can't find some or have questions, send me an email at aerissana at gmail.com, I may be able to help you. I work with this stuff all the time and the doctors I work with would probably let me get you some.