Today was a rough day.  Lynn and Linda went with me to take Nicki into Adobe Vet Clinic.  They evaluated him and found out he did have feeling in the rear leg we were worried about.  It had a puncture wound that was sore enough he wouldn't put weight on it and actually didn't react when I poked his toes with scissors.

He was dehydrated, so they gave him a liter of fluid and said they felt he should have 24 hour care, which they don't do.  So we packed up and headed for the 24/7 specialty clinic. Years ago we had a cat named Misfr with eye problems and we took him there for a round of treatment.  So we not only knew where it was, we were prepared for the estimate.

He was 12 years old which is a worry for knocking him out to suture the wounds and also they were afraid he might be septic.  I guess bite wounds are bad, no matter what mouth they come out of.  I always heard people bites are worse than dog bites, probably an old wives tale.

They delicately discuss how far you want to go to save your dog, because they have all the bells and whistles, I would imagine they have the same machines as people doctors.  I told them I'd like blood tests, and x-ray to see if he might have some broke bones or any internal problems.  They said it would be about an hour or so.

We went to lunch, came back and waited, and waited and waited some more.  It was about 5pm when they finally called us back and we got the good news, no broken bones and the bad news, he had lung cancer.  The tumor was about 1/2 the size of his heart.

The vet was talking about surgery and chemo and I don't know what all.  She said with the surgery and chemo, he'd probably have a year or so.  Without treatment, if he survived the fight damage without infection and whatever else might happen, less than a year.

I have always said I would not put one of my animals thru some of the horror stores I've heard people go thru to keep their "fur" kids alive.  I didn't change my mind, he was euthanized before we left the clinic. 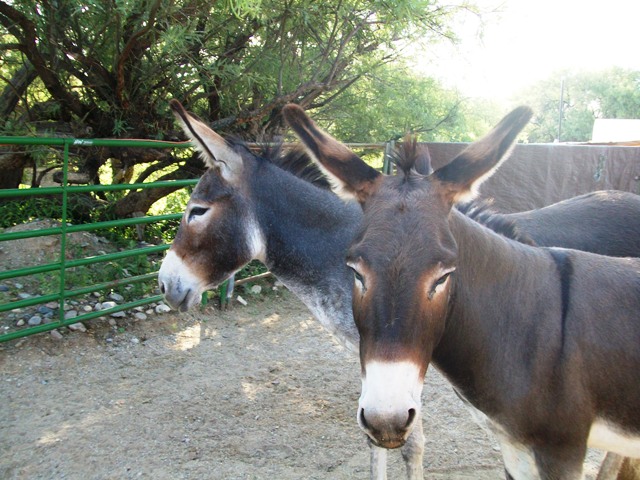 John had a jeep tour this evening and I knew there was a couple coming out to possibly adopt Falena and Selena.  As the day progressed we found out, just as John was leaving the people showed up, so Doug got to show them the girls, and they are interested in adopting them.  We'll have to do a home study, so we'll see how it goes.  I have to call them tomorrow, got in too late tonight to be calling people.

Also as John was leaving, he happened to notice that Casper was outside the fence, eating the icky hay John puts out for the range cattle.  I guess Casper took off and showed John where he had gotten out.  As the day progressed I guess Doug got to put him back in 3 or 4 more times.  He doesn't seem to go anywhere, he hangs around, he just likes to challenge the fence I guess.   He's small enough he can either go under it, or thru it, depending on his mood.

John also got to show the people a rattlesnake, he said about 4 1/2 feet long, by the pens.  That would be a big Western Diamondback.  That's the 1st rattlesnake we've seen in a long time, and the 1st snake this year.  Wonder if it's the one that lived in the well house all winter?
Posted by Tish at 9:30 PM

Sorry to hear about your dog, I know it hurts. Casper seems to be trying you, I hope he does not have a smirk on his face when you find him outside the fence. It's almost like he gets out to just show you that he can. We bought a cow once from a man that had tied her out to eat all the time, she had never been fenced in, when we turned her out she just walked through a fence.. After a few days of this it got old putting her back in so we sold her to a family that wanted to tie her out. She seemed happy with them.