You might notice the barrel on the left side & if you look real close you will see see flame.  This was John's answer to the cold weather this morning.  It felt so good I wish he had done it yesterday, when all the volunteers were here trying to keep warm.  It was so cold this morning when we went out, I came right back in called volunteers & told them there probably wouldn't be a lot of people coming today as cold as it was, that John & I could handle it.  No sense in anyone else trying to stay warm.

Actually by afternoon the sun came out & it wasn't bad at all.  Had a few people show up & the donkeys appreciated getting treats.  They vocally let people know, what they wanted, as soon as the people got out of their cars.

Mike called this morning & was going to bring Zeke up to visit with the people.  I called him & told him as cold as it was there probably wouldn't be many people.  But............ I am going to keep them in mind for next year.  I know the people would be excited to see an "old" prospector & his donkey walking around.  Most of the people that come out, have never been around donkeys at all, so that would be a lot of fun.

Tonight at feeding time, Tucker got himself in trouble.  I was bringing their mush in the gate, & when I turned around to latch it, I felt something on my back.  Turned to look & Tucker had reared up & put his feet on my shoulder.  No, no..........this isn't allowed, if Mocha wants to put up with that nonsense, that's her problem. 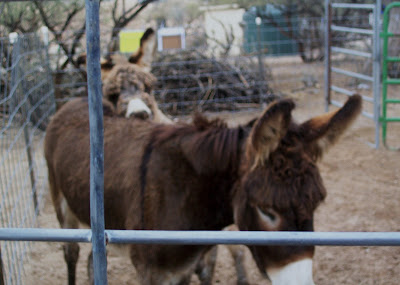 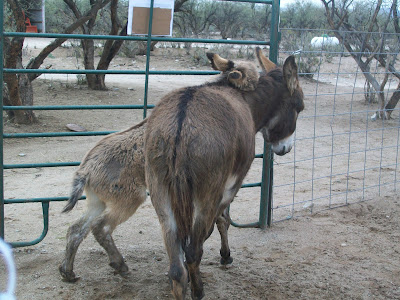 I was not amused..........!!!  I grabbed his front leg, as hard as I could,  turned my back, & ignored him the whole time I was in the pen dumping the mush.
According to the "experts", this is suppose to hurt their feelings & break them of what could become dangerous behavior.  He bounced off me & started pestering Mocha, so I don't think it bothered him very much...............!!!  He'll be 3 months old Tuesday & is growing like a weed.  He's already taller than the minis, & seems to be doing very well, I hope he outgrows whatever made him choke on hay.  The vet didn't tell us how long we will feed him mush before we "try" hay & dry pellets, so I guess we'll just play it by ear & see how it goes.  We've got a system that works for feeding Mocha her hay, but it would be nice if he could run loose on the property.  He runs around & around their pen, but he'd have a lot more fun in a larger area.
Posted by Tish at 6:38 PM