This morning when we got ready to put Thelma in the trailer, she really loaded pretty good, considering last week took about an hour.  We put 2 leads on her, she got to the trailer, looked it over & hopped in.  She really is a special girl, she is more than willing to meet you half way, even if you are doing something she has never tried before.  Just takes patience. 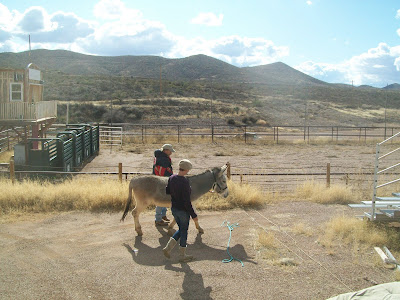 This is Bugsy aka Eeyore, heading out towards the trailer, where Thelma was waiting for him.  He has lived by himself in Tombstone, for quite awhile, so his life style is really going to change.
We got to their new "digs", they both hopped out of the trailer & the posturing started. 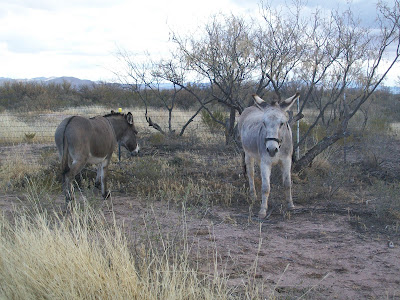 Well, maybe not love at first sight........!!!
She double dog dared Bugsy to try to get any closer than this.  He pretty much didn't care, except when she was somewhere in the pen he hadn't had a chance to see.
Mike got excited about the kicking & ear pinning going on, but I told him that was pretty much par for the course when introducing donkeys to each other.  It should go pretty good, because they were trailered together & then put in a pen neither had ever been in before, so it's a complete lifestyle change for both of them.  They'll have to rely on each other. 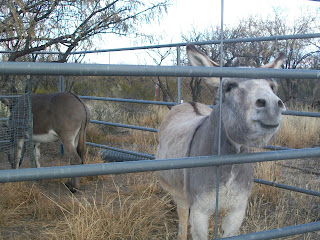 I THINK BUGSY IS READY TO GO HOME NOW.......!!!
It's finally trying to warm up, at least during the day.  Poor old Pepper, even with his knee cover on, he still can't move very easily.

UPDATE:  I went ahead & put Whinny Warmers on Pepper's right front.  They aren't much fun to put on, because Pepper has such a hard time standing on 3 legs, & it takes quite awhile to thread the warmers on because of their length.  I finally had to call John to help, one to thread & one to help hold him up.  We'll see if he is walking any better in the morning.
Posted by Tish at 3:51 PM