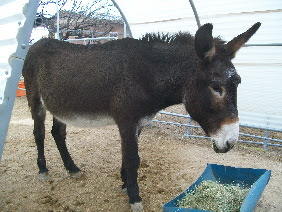 This is Jenny, she seems to be the ring leader in "boy" chasing.  At least the boys, mainly Chester, BlackJack, Quilla, Buster, little Justin, & slow gimpy Pepper are trailing after her wherever she goes.  Lynn seems to be the organizer, at least she tries to be in charge of who is doing what.  Unfortunately none of them pay any attention to her, no matter how much she runs around yelling.  Tula is usually the lead jenny & they all still follow her into her pen, but she doesn't seem to be the "party" girl right now.  Jenny always indoctrinates all the  boys when they come in, big ,little, old , young, she doesn't care.  We have a new guy coming in a week or so, I hope she doesn't wear herself out before he gets here.  She is really walking much better than she has for awhile.
Lucy still isn't walking very good.  I've been checking her feet twice a day with the Ray-tek...........  So far her front feet temperatures are within 10 degrees of Buster's.  I figure they are usually in the same area, although the last couple of days he's been chasing after Jenny with the other boys.  I'm still giving her traumeel, maybe it's helping, I hope so.  I have some devil's claw powder coming so I'll probably try it in a couple of days, when I run out of the traumeel.  Right now her front feet are getting pretty long, so I'll not try to put boots on her until she's trimmed again.
Sha'ba only had his microfiber blanket on last night, & hopefully it won't get cold enough again for his heavy blanket.  It's going to have to be washed before I put it away.  I haven't quite decided how to wash it.  It needs to be done in a washing machine.............BUT...... although I can take one set of straps off, the ones that go under his belly are sewn on.  I washed Pepper's blanket a couple of years ago, & the buckles ripped holes in the lining.  In fact I had to buy him a new blanket.  Anyone have any brilliant ideas?
Posted by Tish at 12:31 PM

When you wash the blanket put the buckels in zip lock bags and seal as much as your can. or even tie just a plain plastic bag or net bag over the buckles.

I did that last time & the bags didn't stay on, I guess this time I'll use duct tape or something to keep them from opening. He likes to lay in his pee pond every night, so the blanket "definitely" needs to be washed......!!! YUCK!