This morning Jay called from Gammon's Gulch & said they were ready for the donkeys.......!!!! HUH?  They were suppose to let us know before 4pm yesterday, whether  or not  they were going to use the donkeys, since BlackJack had a problem with the pack saddle.
We were waiting for some people to come out for a tour, but fortunately they would have to drive past Gammon's Gulch to get to our place, so we figured we could cross paths on the road if they showed up.
We informed BlackJack & Cisco that it was show time, put on their halters & headed down the driveway.  They started off real good, but all of a sudden Cisco decided he didn't want to go & stopped.  BlackJack was still ready for adventure, so I took off with him, & John stayed with Cisco to discuss the problem & come up with a solution.  The solution is, if he doesn't want to move he isn't......!!!  Simple huh?  I kept looking back & they'd move & then stop.  I wasn't having any problems with BJ except he was more interested in snarfing up the weeds & grass growing along side the road, than following me.  We got up there & John & Cisco weren't far behind, Cisco had finally decided this might be fun after all I guess.
Just about the time we got there, a little car passed the gate, so I handed BJ's lead to someone & took off running, it's a "fur" piece, I could hear John yelling, "quit running you'll have a heart attack"......!!!  Wherever they were headed it wasn't here.  So I gathered up the camera, cell phone & some tea for John & headed back up there.

The donkeys were surrounded by a bunch of actors & crew, petting them & making over them.  I looked over by wardrobe & this is what I saw. 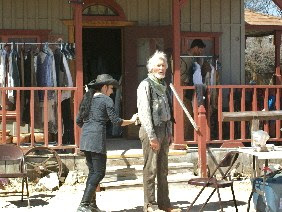 Funny, just a few minutes earlier he had on khaki pants & a black shirt, didn't take long for them to grab him for a make-over.
The director came over to me to ask if we had some different colored lead ropes, the ones I grabbed were striped & green & didn't look very much like the 1880's.
So I headed back home, at least I had enough sense to pick up the golf cart on the first trip back.  Picked up some leads, hopped in the golf cart & back to the movie site.  They were shooting the street scene with the donkeys, although Cisco decided there was too many ropes involved.  As an x-roping donkey he isn't a fan of ropes, he will tolerate one, but 2 or 3 is too much.  So they just used BlackJack.  There's enough ham in him that a few ropes aren't going to bother him.  They did a couple of practice runs, did a couple of shots & were done.  WOW! the movie a year ago, was suppose to be one day & ended up to be four LONG days.....!!! 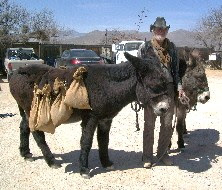 When I was taking the picture I didn't notice the cars in the background, I was enthralled with the bags of sand they hung on BlackJack to represent bags of gold I guess.  And trying to get them to stand still headed the same direction........!!!!
So we headed back home, John leading Cisco & me leading BlackJack while I drove the golf cart.  He didn't mind the golf cart, but he did mind not getting to eat the weeds, so he kept going from side to side, trying to get to the weeds.  I thought he might just follow John & Cisco if I turned him loose.  He thought that was great, & headed for the nearest weeds or "donkey buffet".  We finally got them to the driveway gate, & turned them loose.
The tour never did show up, have no idea what happened to them.

I want to see photos when John is all duded up in western wear, circa 1890's!!

I had to sneak a picture before they took his clothes back. You're not allowed to take pictures on a movie site, although they didn't say anything. The last movie they told us "no pictures", even though it was my husband & my donkeys.......!!!