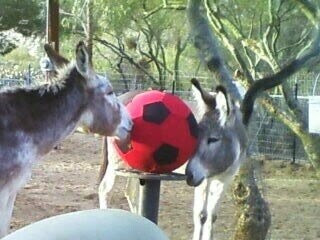 THANKS SHERRY.......  CHILI & TIRZA two of our alumni.......!!!
Sherry has done a wonderful job with these two.  She is now riding Chili &; she says he doesn't want to go home.  Guess he isn't "barn sour", huh?  Tirza is somewhat of a prima donna, not sure if she will enjoy riding or not.  But she's got a couple of years before she "has" to grow up.
I guess we'll have to stop using the name Miss Cranky for Noelle.  Yesterday she seemed to make a decision that we weren't going to eat her &; is now taking treats, &; letting us pet her &; hasn't kicked again.  She's tried hanging with the donkeys, but so far seems to end up with the mules.  I would imagine because her companion for years has been a horse.  That will probably change over time as she settles in.  She has a big scab area underneath her throat, like she's scraped it on a fence or something.  She was in  corral  panels when we picked her up & had been in there for a couple of weeks so I have no idea where the scabs came from.  She seems to think John is "the man", of course he gives her treats every time he sees her.  Yesterday when I was checking the scabs he told me about, she reached around to me like I was suppose to give her a treat.  When I didn't give her one, she walked off, so I guess we can figure out what motivates her......!!! (G)
She's still not eating as much hay as she should in fact this morning she won't even look at it.  She can afford to lose some weight, & I hope she will finally decide that alfalfa is just a fond memory.
Heard from Hoofprints on the Heart Rescue that the little molly mule is having problems.  There is a problem that can develop with newborn mules like RH factor with humans.  She's had plasma IV's & she is still too weak to stand & nurse, so they are having to feed her every 2 hours, until she hopefully gets enough strength to stand on her own & nurse.

They have 8 more mares that are PG with mules hopefully this doesn't happen with any of them, although the percentages aren't good, about 1 in 10 mules born have the problem.

The owner said they lost 4 babies last year, at the time no one thought much about it.  And I don't know if it was donkey babies or mule babies.  But if it was neonatal isoerythrolysis (NI) in the mules, it will become worse every time the mares are bred to the same jack, which they were.