This afternoon we went down to Hereford & picked up the 2 mares with their babies.  They loaded pretty good & rode well, except for whinnying every time we slowed down.  In the gas station we were the focal point of interest by everyone in there, since the horses were yelling their heads off the whole time.  Got home & of course had the usual welcoming committee blocking the driveway & surrounding the trailer.  Rusty the mule was very excited when he figured out there were horses in the trailer.  I finally had to get a whip to get him away far enough so John could back up to the pens.
Of course when it came time to put everyone in their pens, we had some problems.  We decided to split them up, because one mare gets more hay than the other, & unfortunately she isn't the dominant mare.  Daisy got thrown out of her pen as planned, but with the change in plans, Chester got put in with Tula.  Tula doesn't like him in her pen, actually she doesn't like any one in her pen.  And she particularly didn't like 2 horses next door.  So it took awhile to convince her to go in.  Daisy & Frijolita took the opportunity to change pens, & we left it that way, which just added to the confusion.  But finally everyone got somewhere & got fed.  John is going to build a pen for Chester tomorrow, not sure where...........!!!!
Tomorrow we will go back & pick up the pigs & the goats.  There was a woman interested in buying the 2 stud colts, but if that doesn't happen I guess we'll bring them home too.  I'm starting to feel like we're running an Ark...........!!! (G) 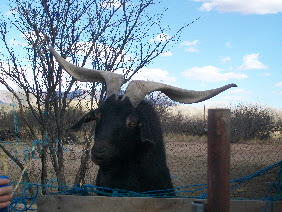 Here is one of the 3 goats.  She says he's never butted, with those horns I hope she right. He likes to drink Kool Aid out of a cup. 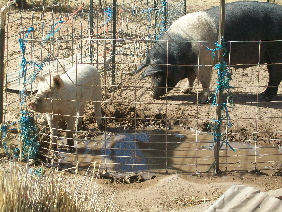 This is the 2 pigs, momma & her little girl.  They are both friendly as they can be, so hopefully they will be good little guests when they get here.
We took the 2 geese & the rooster & hen to Terry on the way home.  When we left the geese girls were trying to entice her gander & he was ignoring them.  She has a little banty rooster with her hens, so for the time being she put the 2 new ones in a separate pen, maybe she will be able to put them together later.
Tomorrow morning around 8am I'll take the kittens in for their "date with destiny".  They should be ready after 4pm, so we might be able to get them on the way home from picking up the other critters.  Somewhere in there we need to "cobble" a couple of pens together, one for the pigs & one for the stud colts, complete with the required electric wire.  John's given up asking when his relaxing retirement starts...........!!!! (G)
Posted by Tish at 8:36 PM