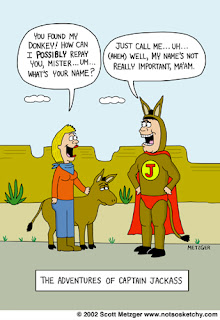 I got a call back from BLM, today, & although the paperwork I was given when I adopted him doesn't reflect it, he was in fact, gelded in June 2006. Even the BLM guy doesn't know why they gelded such a young one, he would only have been about a year old. I am thrilled, he will not have to go thru being gelded & now he can be with the other donkeys, male or female.
John has been busy trying to get the chain link around the old chicken pen taken down, so we can turn that area into a new corral. Unfortunately when he put the fence up, he meant for it to be permanent. He cemented the fence to the poles underground, so he's having lots of fun, with his tractor, & also a sledgehammer.

We are getting some new corral panels delivered this Friday to use in that area. We will probably use that corral for the donkeys that have to be kept away from the mesquite beans when they start ripening & falling off the trees. Some of the donkeys, eat a few & go on. But it seems like the ones that need the high starch & sugar the least are the ones that turn into vaccum cleaners.

Belle's jaw feels good, but she has been rubbing it on the feed bunks, so I assume it is bothering her. We will make an appointment at the Equine Clinic up at Gilbert to see if they can remove it. We might also take Buster Brown at the same time. He has a growth on the side of his face, that has been slowly growing for the last few years. It's probably a sarcoid, but I'd like someone that knows what they are doing, to look at it.
Posted by Tish at 1:48 PM