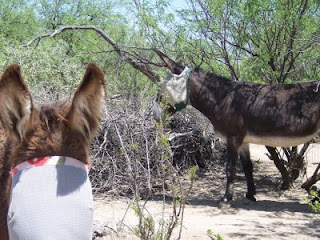 We've been controlling Jenny's time out of the pen. She wants to see everything & do everything. Unfortunately she gets far away from her pen & then it's a challenge to get her to walk back. Last night we let her out for an hour or so & it took awhile, & carrots to get her to walk to the pen.

This morning she actually walking pretty good, still lame, but willing to put weight on both front feet, even raising a hind foot to scratch an ear. She also doesn't want us coming over to her & petting or scratching. Her reasoning being, that we probably want to put her back in the pen. She even tried to trot away from me, which was pretty exciting.

She's itched shedding hair off on trees, ate some greasewood, & mesquite, checked out the old chicken pen area & drank from the big stock tank, so life is good, at least until we want to put her back in "prison".