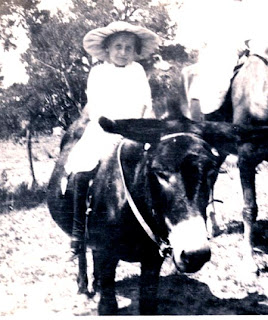 This morning John came in to tell me Buddy Brat was on the ground & moaning. This is not how I like to start my day. I went out & he was sitting up, not acting like colic, but obviously not a happy camper. I checked for gut sounds & he had them. I watched him for a few minutes, he got up & seemed just fine. I would imagine he had a gas pocket somewhere in his "miles & miles" of intestine & it passed thru. While I was checking him out I noticed that his neck crest is noticeably firmer & his overall body shape is more rotund than svelte. Although it isn't mesquite bean season yet, maybe it's a good thing John got the large pen finished yesterday. I think Buddy needs to stay in 24/7 for awhile. We weigh his hay, but unfortunately there is too much browse on the property that we have no control over, unless we pen him. Cisco is his running buddy, & he's a little pudgy too, so they can keep each other company in the pen & survive on "rations" for awhile.

Jenny is out again today, & little more ouchy on her front feet after being out all day yesterday, but still more than willing to explore. Katie & Courtney are coming tomorrow to get some of that length off her feet. That should take some of the pressure off the internal part of her feet & make her more comfortable.
Posted by Tish at 10:07 AM