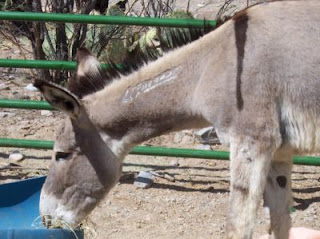 He's really a mellow boy. I threw a jolly ball in his corral this morning, to see how he would react. He watched it hit the ground & wobble around, but it didn't seem to be a big problem.

The picture shows his BLM brand. All of their animals are cold branded on the left side of their neck. His looks pretty recent although he's been in the system since June of 2006.

In the next couple of days we will probably squeeze him between a couple of corral panels & put a fly mask on him. The flies aren't too bad yet, but everyone else is wearing a fly mask, so he might as well have one too.

We are putting a mask on Tula everyday & taking it off every night. So far she is unwilling to stand & let me put it on her, so she has to go between the corral panels. She seems to know we aren't going to hurt her, but she isn't ready to give up her independence. That's OK, it's a long summer, I bet she'll give up before it's over.

Justin is really being a little pill. We have had to "design" a mini size squeeze area for him, in order to put a fly mask on him. Unfortunately it's turned out triangle shaped. He learned real quick, where to put his face, so neither John or I can reach him. I'm pretty sure they are actually smarter than we are & just allow us to feel we are the ones in charge.........!!!!
Posted by Tish at 1:34 PM