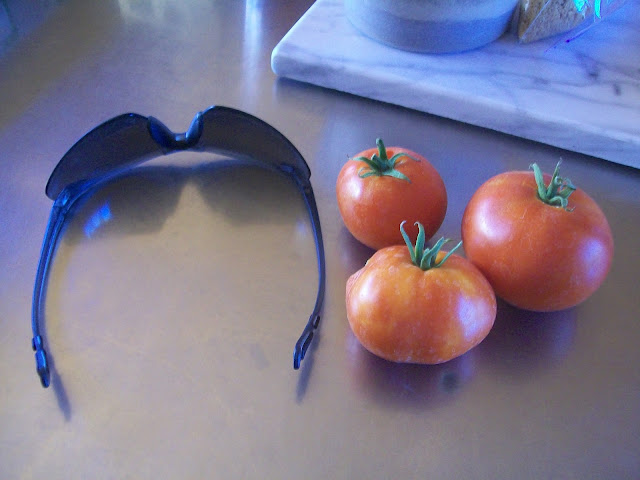 One of my favorite smells in the world is tomato leaves, & one of my favorite tastes is the tomato itself.  For the last month or so I've been able to pick a few tomatoes from my "patch" for Mother.  But this morning I found three ready to pick.  Mother got one for lunch, but the other two are designated for supper tonight.....!!!!

I've been doing a Caddy Shack type of behavior the last couple of weeks.  Who knew desert rock squirrels LOVE tomatoes.  I noticed something had taken bites out of both red & green tomatoes, hmmmm.......!!!  When I told John he said he had chased a rock squirrel off the courtyard.  Didn't know they would climb over the wall, although John did see one manage to squeeze thru the gate.  I put out pink plastic strips to fly in the breeze,  & shiny pieces of aluminum pie pans to whirl around in the wind.  Also put a sun screen fabric over the tomatoes, since it's getting so hot right now.  Not sure what if any of these "scared" them away, but haven't had any damage for the last few days.  One little monster, took a ripe one & green one, & tried to get out the gate with them.  When he couldn't figure out the logistics, he just left them up against the gate.

I had noticed there were 2 places in the tomato patch that the tomato vines weren't going & if they did the blooms died.  One afternoon I went out & one of the outdoor cats, jumped up & took off.  Julius had been curled up in one of those spots.  Boy was I mad, at least I thought I was mad until I told John & he said "oh yes was it Hobo I saw her in there last week.............!!!!  Then I was REALLY mad, he had known for a week the cats would lay there and didn't think it was information worthy of passing on?  I told him I wanted anything he has in his garage & surrounding area that could be used as a stake.  I used up all he had & filled in the rest with sticks stuck in the ground.  You would be amazed at how quickly the vines have filled in the bare spots.......!!! LOL

Doctored the girls this morning & they were almost bored, not even using the ropes on Penny's legs, she will let me run my hands up & down her legs, no problem.  Haven't tried outside the squeeze or picking up a foot yet, but she seems to be doing really good, so far.  Well except for that spraying her legs with Alu-Shield where there is no hair & fly spray.  I had thought of trying to work with them outside the squeeze, but she threw such a hissy over the sprays, guess we'll wait until they aren't so important to her.

John had a jeep tour yesterday, went out with a cowboy hat on, & she took off.  Most of the roping donkeys are afraid of cowboy hats, so that is another bit of information about her former life, probably.

Coquette has been shaking her ears & scratching at them.  So I dribbled some Animax down both of them.  She actually was pretty good about it.  Both of them seem willing to try to get along, although it will take a long time for me to trust Penny, I've seen her in action.
Posted by Tish at 12:36 PM