HACIENDA de los MILAGROS IS OFFICIALLY CLOSED AS OF JUNE 4, 2013 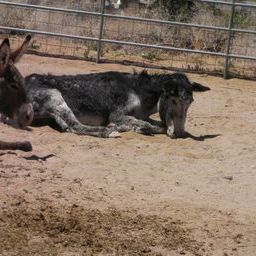 RIP, the pain & suffering is finally over....  Thanks Patti
Can you imagine looking at an animal like this every day for months, having to turn him over so he didn't get open sores on his body, because he couldn't get up or stand? I will go to the wall for these animals.  But part of being a good steward is making sure they have quality of life.  These animals deserved better.


Thank heavens.........!!! It was too late for 7 donkeys & some of the horses, but for the  other 80 plus equines they now have a chance at a life with health care, dental care, foot care, food to eat & when the time comes a final obligation that is the responsibility of everyone that has animals in their lives.

I will cover this in more detail later.  Right now the director of the "sanctuary" is trying to start another sanctuary called Circle of One.   He managed to take 7 horses when he was removed & is now using them as "seed" for the new rescue.  He is sending out requests for donations to people that were on the donor list for Milagros.  Please spread the word to anyone that might be tempted to donate to Wynne's new endeavor.

Wednesday we're going into Hoofprints in Tucson to pick up the crippled jenny, & James at Hoofprints asked if we would take a club footed younger gelding too.  Guess Courtney is going to have some interesting new feet to work on for awhile.

About 60 of the donkeys are at Hoofprints & the last 5 donkeys are being removed from HDLM tomorrow.  So if anyone would like to add a donkey or two to their family, I'm sure James could find a special one for you in the herd.
We picked up Jack & Molly as planned.  We're keeping her in a pen by herself so we can monitor input & outgo.  So far she is eating, drinking, & pooing, but no peeing.  Not sure what that is about.  We have an appointment to take her into the vet tomorrow to see what they think & do some blood tests. Jack is very confused, he doesn't understand why he can't be in the pen with her.  For one thing she is getting a little alfalfa hay & oats.  If she does have hyperlipidemia it is important that she eats, so her system doesn't think it's starving to death.  He's such a little pig, he'd be right in the middle of the goodies.

Got a call from our neighbor that has the movie site, Gammon's Gulch across the road from us yesterday afternoon.  They had been sitting at the table looking out the window & saw a young black bear wandering down the main street of the western town.  That's the first time we've heard of a bear that close to us.  One of the other neighbor's said she saw it a day or two before.  I would imagine it is a young male that has been kicked out of the area he was born in & is searching for a territory of his own.  There really isn't much in this area to make them stay, so hopefully he has moved on.  Years ago the local rancher shot a mountain lion, but we've never seen one of those either.  I don't think a black bear would bother the donkeys, they are usually pretty timid, but if he got hungry enough he might take on one of the minis.  So I would just as soon he go someplace else.

Oh that is sad sad sad, and then you have to get mad mad mad.