I hope Stacy doesn't mind if I put this video of Dusty on the blog.  I missed him when he was really doing his thing, running up & down the fence trying to get a better view of Bijou.  Energetic little guy, I guess health wise he's really had a pretty rough life.  She got him when he was a month old, I didn't ask how old he is now.  She said he is so ornery if he was a full size horse, he'd be a rogue.......!!!  LOL  The word spoiled comes to mind, she said they never knew how long he would live, so they really spoiled him, & he fooled them by getting better. 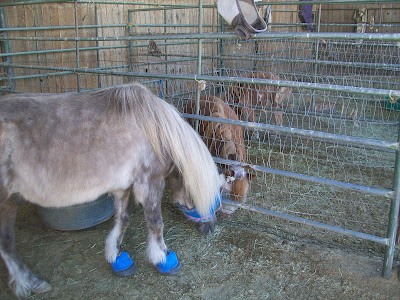 This is Bijou with one of the dwarfs & in the 3rd pen is the little 24 inch dwarf.  I forget to take a picture of him.  Both of them have horrible fused joints, but they were very friendly & move around.  She says when she is out in the pen area, she lets all the little ones out together & they get along just fine.  I don't know if Bijou will be with them or not, he looks big compared to them.  Stacy has already talked to her hoof guru.  She's seen his x-rays, about all they can do is get the heels down & leave the sole alone.   His soles are pretty thin & the coffin bone is really close to the ground.  She is hoping to get him out of the boots, I put him in the boots when he came here, so he's been getting along without them before.  OBTW Stacy likes the name Bijou, so I guess he'll keep it.

Honcho is getting along just fine now.  This morning when he came out of his pen Boaz was standing there waiting for him.  Honcho spun around & kicked at Boaz, & I got on both of them.  Then they walked off together.  I guess they are still figuring out who's going to be in charge.  I would imagine it will be Boaz, but I could be wrong.  Honcho isn't serious enough to be in charge.....!!!

Both Honcho & Buddy are losing their "sausage" look.  And their neck crests.  We're soaking Buddy's hay & they are both getting Magnesium Oxide & Al-Car to help with balancing the hay & to help with their insulin resistance.  Honcho has always been built "sturdy" like an ox, but he's never had problems with fat pockets or anything.  Buddy on the other hand has always looks like a sack full of basketballs, & no matter what we try, he doesn't lose his "basketballs".  We keep trying though, John said he needs to get bit by a rattlesnake like Quilla did a few years ago.  I don't think that would be a good idea..........!!
Posted by Tish at 1:43 PM

I am glad Honcho and Buddy are losing their Chunky Monkey appearance ;)! And that mini cracks me up, WHAT A DINKY LITTLE THING! Bijou must feel like Kobe next to him! Not that he needs a ego boost, right? ;)

Bijou's ego is pretty good, although I think Dusty's probably is better......!!! LOL