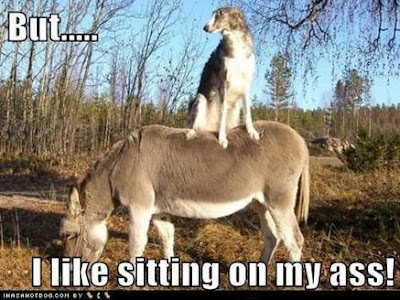 She did 8 of them, including Gus & Jenny, which are the reason she was here again so soon.  She wants me to send pictures of Jenny's feet to the clinic in Gilbert to make sure she's trimming the way they want her trimmed, & also to see if there is anything else we need to do.  We don't see any growth down from the coronet over the resection area, but it does look like the open area is getting narrower.  The hole in the bottom has grown out enough that she trimmed some of it off.  So I guess we're making progress.  Jenny was one of those that stayed in her pen all day & didn't appreciate the situation.  She wasn't really horrible, but she did let us know she wasn't real happy.  Although animal crackers given at regular intervals seemed to soothe her nerves. 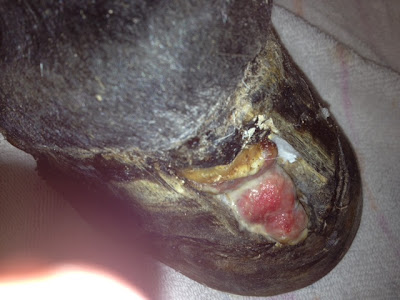 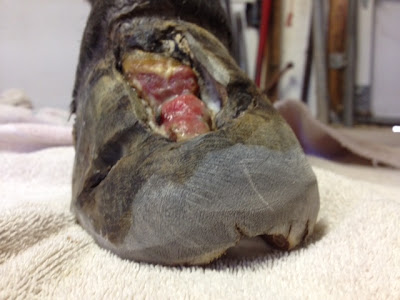 Courtney was pleased with how well Gus is walking & the fact that he is moving around more than he did a year ago.  She also noticed how svelte he's getting.  He still has his little saddle pads, but like she said, when she first saw him, you could have set a dinner service for 6 on his back.  Now maybe just service for two.  He might keep those pads, a lot of time they don't lose them, but he does look much more comfortable.

She noticed Honcho's feet were pretty long so we decided to do him.  When Honcho left here 1 1/2 year ago, he was good with his feet.  I put a halter on him, he took one look at Courtney & absolutely had a tantrum.  For a donkey he is very quick & always has had a lot of attitude.  Let me put it this way, you better be smart & knowledgeable or he'll be running the place in no time.  Courtney said, "no problem",  She has a couple of rope halters with knots that line up with the nerves on either side of the nose.  All rope halters have the knots but these are "special"....!!!  Put that on him, & he never even challenged it, he stood like it was what he had planned for the day.  Which of course irritated both Courtney & me since he could have done that in the first place.  But he's always challenged authority & guess he always will.  I'd love to find him a home where his personality was appreciated as it is, he could be taught to do just about anything.......if he wanted to do it.

Found out yesterday what probably happened to the masks Boaz is missing.  When we were rounding up last night, BlackJack had a death grip on Boaz's mask.  Yelling & chasing on our part just made it more fun, no matter what we did, BJ wouldn't let go........Grrrrr!  Finally Boaz took a quick turn & BJ lost his grip.  I wondered why Boaz was the only one losing masks.  Now that Buddy Brat is back BJ will have 2 of them to pester.  Years ago I went out & saw dust & dirt flying up in the air.  BlackJack had hold of Buddy's mask & had reared up in the air, so all 4 of Buddy's feet were off the ground.  GOOD FLY MASKS, sorry Betty quit making them..........!!!!!
Posted by Tish at 11:51 AM

broke my heart to see those last few images :( it's really amazing what you guys do for these sweet animals. many blessings from vancouver!

It's always so satisfying when we can help them, & so sad when we can't.

So sorry to hear about Eeyore aka Chief. It really did sound like he had some type of obstruction in his throat, fluid back-up, not eating, high white count. My guess would be a mass of some type. Those decisions are the worse to make even though you know you are doing the best/kindest thing for them.
I think Jenny's foot looks great! You have done such an excellent job of bandaging & keeping it clean.
Glad to hear about Gus, it's certainly a bit of a battle with him. But keep him comfortable, he'll move more, drop a little more weight & increase circulation to those little hoofies. Win,win situation. Hugs to both him & Quilla & of course you & John.

wow, good work, although makes me hurt looking at it. Good work to all!

It would take a nurse to think that foot looks great! LOL I just wish there was some growth from above it, but maybe that isn't how it grows, I have no idea. Sent lots of pics to the clinic yesterday, haven't heard back yet. Probably will call them tomorrow.