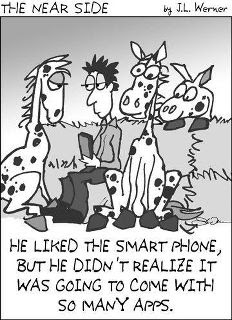 Bijou was out all day yesterday.  After watching him for awhile, we've come to the conclusion that he has probably always been in a pen of some kind.  He had no idea of what to do, with all that freedom.  He stood around the pens for awhile, went in one & laid down & finally in the afternoon started following some of the donkeys around.  John had to put a halter on him to get him back in his pen.  He was down in the far corner of the property, when all the others heard the dinner bell & headed back to the pens.  I'm sure after a couple of days, he'll figure it out.
John put everyone in their pens, before he went to get the little guy.  All of a sudden Frijolita, Chantilly, & Jenny "discovered" him.  He had been in a pen beside Jenny for over 2 days, he had been out with them all day, & for some reason those 3 zeroed in on the fact that.........."he ain't like us"....!!!  It was like he had grown another head or something, absolute panic on their part.  John thought Chantilly was going to try to jump out of her pen again, & Jenny actually ran, even though she is almost 3 legged lame because of abscesses in her left rear hoof.  Since her pen was closest to him, she wouldn't even go near the pen, ears up & totally locked in on this hairy little thing with no ears.  It took almost half an hour to entice her into the pen & I tried putting her hay where she couldn't see him.  But noooooooo, she had to be able to stare at him while she ate.
The whole time all this nonsense is going on, he is busy doing little horse stuff, like eating & ignoring the big silly girls.  So far this morning everything seems to be OK, but we kept him in his pen overnight. Hopefully when he goes out today they will accept the idea that he is part of the herd, even though he looks a little funny.
So far Rusty hasn't really paid much attention to him.  SIGH!
Posted by Tish at 8:39 AM

Donkeys and horses can be so funny. We have a donkey across the wash, and he can't be seen because his pen is up a steep bank and behind a mesquite thicket. When he snorts and sounds an alarm all 16.3 HH Rambo acts like a scared chicken and bolts.

Size doesn't seem to matter, either when they get scared, or when they are mad.....!!! Cheyenne is only 32 inches tall & will back any animal on the property up if food is involved..!!