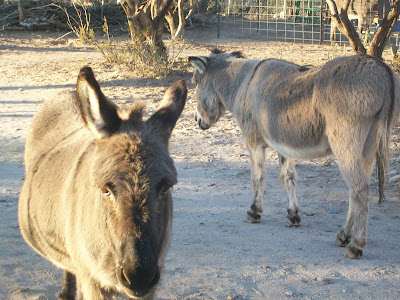 Lynn & Drifter
Another day of hauling animals somewhere to get something done to them.  Drifter & Rusty the mule, got to have their teeth done today.
Found out Drifter is 25-30 rather than the 15 or so, which was my best guess.  Oh! well, he's still a cute little guy & seems to be in pretty good shape.  He'll get his feet trimmed tomorrow & will be ready to go to his new home, that is waiting for him.  I hope they appreciate what a great little pocket donkey he is.  Whenever we're outside he wants to be with you, "helping".
The dentist was quite impressed with Rusty's 33 year old mouth.  He has a couple of teeth that are loose, but other than that they are in good shape.
We weren't so impressed with Mr. Rusty, I had to put a stud chain on him this morning.  Put the halter on him, & the lead, headed for the trailer, he jerked back, & ran back to where he had been standing, waiting for Jack to get thru eating, so he could go in & finish what Jack left.  Rather than have him do it again, I just put a chain on him.  Boy, did that make a difference in his level of cooperation, & I didn't even use it.
When John was leading him back to the trailer after his dental appointment, he jerked back again & went to visit with a pretty little filly that was there to get her teeth done too.  We put 2 leads on him, & he led like a well behaved mule, hopped into the trailer like a good boy.............Grrrrrrrr..........!!!!!  John said, "see he needs a horse of his own"..... WHAT?  So now we are suppose to actively seek a horse, so Rusty can have one of his very own.........??????   NOT......!!!
Tucker has decided that being cooperative isn't as much fun as being a brat.  This morning I started to put his fly mask on & he took off.  When I got hold of him again, he was trying to "escape".  I straddled him & it was still a wrestling match.  When we came in from having teeth done, he had taken Mocha's fly mask off & was "wallering" it in the dirt.  John says he's in the "terrible two" stage, that is 2 months, not 2 years.  He use to like to stand to be scratched.  Starting today, he can't stand still that long I guess. I really need to get busy & teach him to lead.
We've finally figured out an eating schedule that seems to be working.  In the morning Mocha & Tucker get their mush.  When Thelma is through eating her hay, she goes out of her pen, & Mocha goes in her pen, to eat hay & Tucker can see her thru the corral panels.  He whines a little bit, but has been pretty good.
At night they get their mush, & as soon as Thelma finishes her hay she goes out, Mocha goes in Thelma's pen, until John goes out & lets everyone out at bedtime.  Then Mocha goes back in with "monster" boy for the night.
So far it seems to be working.  We might be doing this for weeks, so we want to make it as easy as possible.  The idea is to give his system, especially the sphincter muscle at the top of the stomach, if it's causing the problem, time to mature.  No one can say for sure if he was premature or not, so there is a good chance that he could have something that didn't get "finished".
Posted by Tish at 6:50 PM