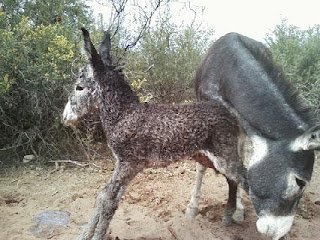 This new little girl was still wet when Art or J, I'm assuming J took this picture.  She looks like a big girl, already bigger than our little Tucker I think.  I'm sure they will send pictures of her when she dries off.

A year or so ago, I got a call about 2 donkeys needing to be rehomed, owner in hospital, etc.  I knew Art & J wanted a guard donkey, so they took the jenny.  Well actually by the time we made a few phone calls she had a little jack following her around.  We had hoped that we got her moved before the jack bred her again, but obviously not.  The owner's wife would never return calls about taking the jack, so we have no idea what happened to him.  The little jack stayed with Falena until he was  6 months old, & went to a home to breed mules.  Haven't heard how that is going, he's still only about a year old, but was going to be running with mares, so he will hopefully get the idea.
Just needs to get a little cooler & I think the fly season will officially be over.  We're still putting on fly masks, but there's certainly not as much "traffic" as there was.  Put out my last order of fly predators this morning.
John hasn't checked Burroland for awhile to see if the cows have eaten most of the mesquite beans.  Last time he checked he said we need more cows over there.  Unfortunately the rancher died this summer & I think his family has sold off most of the cattle.
Jenny is still fighting an abscess on her right rear hoof.  That's the one that started in the front of the coronet, & eventually went all the way around the side & down the back of the hoof bulb.  We thought it was done, but it's been oozing the last week or so.  She's walking good for her, so we'll just keep watching it & keeping it slathered with Ichammol.
Old Pepper got down Monday afternoon at feeding time.  Again I tried to get him up & again, he fought me at the pivotal point.  Vic was home from his camping trip, so I called him & he came right over & we got him up no problem.  He took right off to find Tula.  Just about the time I start thinking about, "what if", he shows me he's got a lot of life left in him, unfortunately the body is weak, especially on the right side.  I wish he'd learn to lay on his left side only, sure would simplify life for us all.
Tucker thinks he's a big boy now, he is helping momma Mocha eat mush & hay.  I'm not exactly sure he's eating, but she sticks her head in.......he sticks his head in..........she raises her head.........he raises his head.......she chews.......he chews.  Sometimes he has a piece or two of hay sticking out of his mouth, so I guess he is at least gnawing on it.  He is also laying down like a BIG donkey when he lays down now.  Instead of laying out flat, he sits up on his breast bone & looks around, like "LOOK AT ME, AREN'T I SOMETHING TO SEE?"........!!!

It's getting time to start thinking about the Open House, the first week-end in December.  I think this will be our 6th year to participate, & it's always a lot of fun to let people visit with the donkeys.  Of course the donkeys think it's great to have a steady stream of people coming thru with timothy pellets to feed them.

Anyone in the area that would like to volunteer to come & help show people around at the Open House, let me know.  You can come for a couple of hours, all day or whatever works for you.
Posted by Tish at 10:32 AM