Since BlackJack was the 1st donkey we ever got he has pretty much ran this organization since day one.  He's usually got his big nose in anything going on, & enjoys his primary status like royalty. 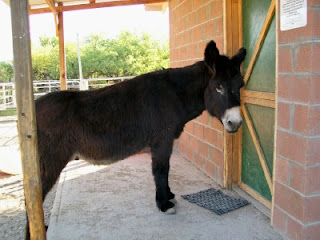 Last night he pulled a stunt that really has John's "knickers in a wad"..............!!! For the last couple of weeks, round up for feeding has not gone well.  There is too much good stuff out there for them to get excited about coming in to get stuck in a pen to eat old dry hay.  It's bad enough on the 10 acres, but add Burroland to it, & if they don't want to come in it's probably not going to happen.
We went to Tucson yesterday & got home just in time to hit the ground running.  Well I'm not running with a broken leg & crutches, but John did.  Low & behold a lot of them were on this side, & most of the others came over from Burroland to see what was happening.  Usually when they come over the first thing they do is get a drink, no water in Burroland.  John was busy putting them in their pens & noticed BlackJack was getting a drink.  John went ahead putting some of the others in, turned around & BlackJack had finished his drink & was headed back for................Burroland.......!!!!  Needless to say, John was "miffed".  Didn't see him again, so today NO ONE IS GOING TO BURROLAND.......... and they can blame BJ, that is if he bothers to come over this morning........!!!!!
Well actually it's going to work out pretty good because we're going to let the 3 girls with the trimmed feet out today.  Louise isn't laying down as much as she was & Thelma has learned how to open the gates, so I guess they are ready to do some exploring.  When we first let them out we like to keep them on the 10 acres, just in case going back in the pen, is a problem for them.  Hope not, because I sure wouldn't be much help for round-up.  The 1st time we let Tula out years ago, it took the 2 of us about 2 hours to get the point across to her that she was going back in that pen because, even though she could out run us, we would still be trailing her until she did.
Our helpers are coming every morning which really makes a difference.  Yesterday I had Lisa help me put boots on Jenny.  She's been ouchy since her trim, but we couldn't put boots on her until her coronet healed from her boots being on too long last week.  John didn't know you can't leave them on without checking them, & I didn't think to tell him.  I just assumed that he would check them like I do, & I guess he assumed I would tell him what to do.  We padded the coronet area, so she should be OK.  She walks much better with boots on.
Posted by Tish at 8:01 AM

LOL about Black Jack....however,poor John!
They are just too smart!
Did you get my message about Frijolita & ALCAR...I sent it from my old computer so it may have gotten lost in cyberspace.
I'm thrilled about my boy's good news.....hug him for me. Hope to do that in person soon...
Hugs to both you & John.
Claire

Your boy has been following Mocha around all day. Got my fingers crossed for a budding relationship.

Got the message, she so very rarely hitches anymore I don't know if it would be worth trying.