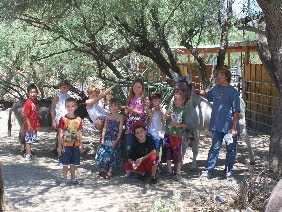 We had a group of kids come out this morning to visit with the donkeys & clean water buckets.  I think a good time was had by all.  The donkeys always amaze me some of the ones we think will be spooked by kids or by a lot of people, seem to take it all in stride. 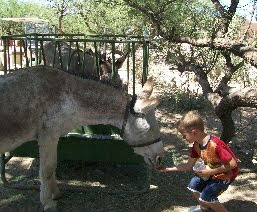 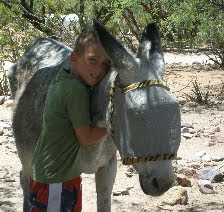 OLD PEPPER & HIS NEW BEST FRIEND
Besides cleaning water buckets, they also exercised the goldfish in the stock tank.  We just cleaned it a couple of days ago, so the fish were easy to see.  Some of the boys seemed to think they could catch them, but the fish weren't having any of that. 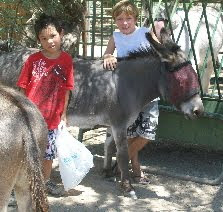 JUSTIN & PEPSI WERE VERY POPULAR
The kids were great help with cleaning the buckets.  We had scrubbies for them to scrub out the gunk & they really went after it. Of course stomping thru the mud was great fun too.  And a hose just has to get used to spray anyone close enough to get sprayed.  Actually as hot as it was today, getting sprayed with water felt pretty good. 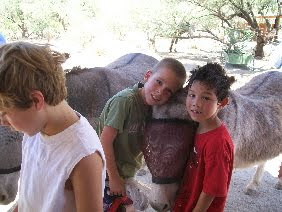 DAISY WITH SOME OF HER ADMIRERS
I was really surprised at how long Daisy stood with the kids, she really seemed to enjoy them "fussing" with her. 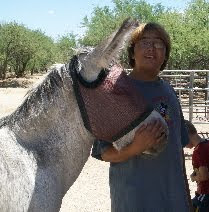 HONCHO THOUGHT THE ATTENTION WAS GREAT!

We put Quilla in Honcho's pen before they got here.  Children really seem to spook him for some reason, & sure enough as soon as we opened the pen, he disappeared.  But the rest of them for the most part hung around for the attention.
Courtney is coming out this afternoon to trim feet.  She's a better "man" than I am, my thermometer on the back porch says it's 107.4 & it's not to the "heat of the day", as they say.  I don't think it's actually that hot, but I wouldn't be surprised if it's over 100.  Mother called earlier to report her air conditioner isn't working & it's 88 degrees in her house.  As you might imagine the A/C guy is swamped & can't get out until tomorrow afternoon.  Sure makes you appreciate the fortitude of the people that settled in SE Arizona.
Posted by Tish at 1:44 PM